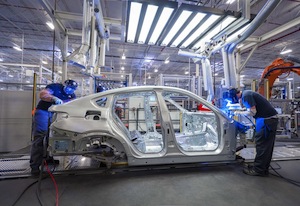 Germany – The company said its international manufacturing network “has shown an excellent capacity utilisation” in 2015 due to high customer demand and the launch of multiple new models such as the BMW 7 Series. This level of production was enabled by the flexible manufacturing processes implemented at its facilities.

“The BMW Group’s two millionth car rolled off the assembly lines back in November,” said Oliver Zipse, the OEM’s board member for Production. “And 2015 marks the fifth time in a row that our German plants have produced well over 1m vehicles a year.” He also explained BMW’s plan to further enhance the performance of its plants by making each a production site for either front-wheel-drive or rear-wheel-drive architecture: “By focusing on one architecture, the plants can increase efficiency while reducing complexity. We aim at implementing this process as we introduce our new models over the next three years.”

BMW also stated that it views digitisation, process modules, and intelligent mixed-material construction as “key characteristics of the network’s future viability”. The OEM believes that digitisation especially – in the form of flexible robot systems, intelligent tools, simulation and automated data recording and analysis – “has a major share in increasing the adaptability of production facilities” and enabling “considerable efficiency and quality improvements”.

Over the next few years, the Group will invest more than €1 billion ($1.1 billion) in its existing production network, including over €500m by 2018 at its home plant in Munich to expand body-in-white (BIW), assembly and logistics as well as adding a new paint line. Dingolfing has already received more than €500m for production of the latest 7 Series, including carbon-fibre reinforced plastic (CFRP) manufacture, but over the next year several hundred million euros will be invested to prepare for future models and technologies. At Landshut, BMW invested substantially in 2015 to facilitate component production, while a further €20m will complete the construction of a ‘lightweight centre’ by the end of 2016.

In its motorcycle division, BMW will spend €100m at its factory in Berlin for the expansion of the existing infrastructure and the addition of new facilities. Half the investment will go towards a new logistics centre which will become operational by late 2017.

The OEM added that it will continue to expand overseas because “a globally connected and flexible production network is the prerequisite of further growth and key to balanced value creation”. In particular, BMW will invest $2.2 billion in NAFTA by 2019. At present, a state-of-the-art BIW facility is being constructed at Spartanburg, South Carolina, as part of the $1 billion investment announced in 2014. The factory is due to reach a record production capacity of more than 400,000 units this year, turning it into the OEM’s biggest site by volume – making about one in five BMW vehicles.

A further $1 billion is being spent on the construction of a new plant in Mexico at San Luis Potosí; groundbreaking is scheduled for the summer of 2016, with series production commencing in 2019. BMW is also investing $200m in its materials joint venture, SGL Automotive Carbon Fibers, at Moses Lake, Washington. Further afield, in China, BMW Brilliance Automotive (BBA) will open its new engine plant, complete with a foundry, in January 2016. The facility will supply drivetrains to the two BBA factories at nearby Dadong and Tiexi.