Beauty on a budget at Farbio

There have been many attempts to bring exclusive, low-volume supercars to market, but the truth is that few of these projects have ever seen paying customers taking delivery of finished vehicles. Building a single, functioning prototype before funds run out is difficult enough; attempting to put that car into profitable production is where the problems really start to stack up.

Which brings us on to Farbio Sports Cars, a company originally started in Norfolk, UK in 2002, to build the Farboud GTS. With initial development costs provided by Arash Farboud, a well-funded sportscar enthusiast, the car was rumoured to have been styled somewhere within the Lotus organization.

The shape of the car is about all that remains of the Farboud, explains Chris Marsh, Managing Director of Farbio. Formerly of Marcos and Invicta, Marsh got involved with the business in 2004, moving on to take full control of the operation in 2007, with Farboud as a shareholder. 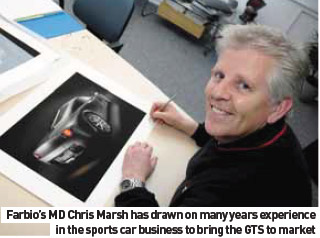 Originally powered by a 440bhp twin-turbo V6 Audi engine, the £170,000 Farboud GTS featured a pushrod-operated inboard suspension system and carbon-reinforced glass fibre bodywork – together with a very limited production run. Marsh saw a different future for the car, in lower prices and higher volumes: “(Volume) makes things much easier, because you can get better deals from suppliers, appoint dealers, work on exports.” The target price was around £70,000, which Marsh predicted would give Farbio a readymade market, in light of TVR and the new Marcos going out of business, the continuing absence of Lotus in the price bracket and Noble’s decision to head upmarket.

Marsh says that after many years in the car business, he knows exactly what people look for in a low-volume sports car. “Customers want reliability, comfort, proper air conditioning, a quiet cockpit and a good exhaust noise.” Achieving this and coming in at £70,000 – or £71,300, the price of the introductory model – has meant almost completely re-engineering the car, an intensive and expensive undertaking. That said, having more than 100 customer orders in the bank made the investment in time and money that much easier, while the backing also made hiring the right staff and dealing with suppliers less problematic.

Underpinning the body is a steel spaceframe chassis with a built-in roll cage, to which the carbon panels are bonded, enhancing structural rigidity. Bolt-on crash structures are added at either end of the spaceframe, while the doors have integral side impact bars. The inboard suspension has gone, replaced by double-wishbone arrangements all round, but the biggest change is in the powerplant.

The Audi engine offered scope for a wide range of power outputs and, with its longitudinal arrangement and gearbox to the rear, was ideally configured for a mid-engined application - but it was far too expensive, says Marsh. Ford’s 4.6-litre, 32-valve V8 was considered, but as it proved too bulky, the team settled upon the characterful 3.0-litre 24-valve V6 - complete with its six-speed gearbox - previously seen in models such as the Ford Mondeo ST220. With new inlets, exhausts and ECU, the unblown engine delivers a claimed 262bhp. The more powerful supercharged versions, developed by Noble Motorsport and featuring a Rotrex blower, are said to produce 420bhp. Most orders are for this model, priced at £94,300, says Marsh. Although the V6 is transverse-mounted and in theory could offer ideal weight distribution, the car still comes out at 40:60 front:rear.

The GTS may look like the original glass fibre car, but the body is now completely fashioned from carbon fibre. In fact it is so light, one man could easily lift up the whole car body. The decision to make it from carbon fibre was easy, says Marsh, who learned about using the material while working at Invicta. Not only does it save a lot of weight, helping to achieve a finished vehicle kerb weight of 1,048kg, it also gives closer, more consistent panel gaps. In order to make the car more usable, Marsh and his team also raised the roof height of the GTS by approximately 75mm, while a boot and a lifting engine cover have been incorporated to improve day-to-day practicality.

While carbon fibre is unrivalled in its material combination of light weight and superb strength, the reason Porsche, Ferrari and other well-known makers of highperformance cars choose to stick with aluminium and steel bodies is cost; carbon fibre is prohibitively expensive to work with. This is why, when it is used in series production, it appears in small quantities, such as in the roof of the latest BMW M3 or the bumpers and front wings of cars produced for Mercedes-Benz by AMG.

As the GTS has large carbon fibre mouldings that are too big for a standard autoclave, Farbio has developed its own in-house solutions for curing the bodies, putting each moulding into a bag and then using a vacuum pump to draw out as much air as possible before heating the part in a large oven. It’s labour intensive, but cost effective, says Shane Monger, Head of Production: “If we had bought a readymade oven of this size, it would have been close to £25,000, so we built it ourselves.”

Farbio buys in raw carbon fibre mat from Advanced Composites Group in Derby, UK, which specialises in the manufacture of high-performance, pre-impregnated (prepreg) advanced fibre reinforced composite materials. ACG supplies much of the carbon fibre material used by Formula 1 teams, with Farbio being one of the few road car companies using the material.

Many small carmakers are at the mercy of parts suppliers, with ever-changing specifications and spiralling costs threatening to close the factory doors. Farbio, though, is protected from these problems by purchasing virtually everything from the Ford powertrain catalogue and a limited number of brake and suspension suppliers. The first Farbio chassis were built by hand, with no jig, from CAD drawings, a system which has been improved with the use of ordinary cold drawn mild steel (CDS) on a Farbio-made jig. Joins are made using predominantly MIG welding (about 80%), with some TIG welding in very tight areas of the frame, wishbones and where welds are more visible to the customer. The company uses welding machines from Miller Electric for both MIG and TIG joining. Upon completion, the frame is sent out to have a roll cage fitted, after which the unit is shot blasted to remove any scale or corrosion before it is powder coated. 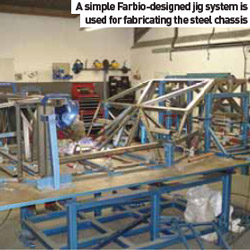 Aside from welding machines and ramps or hoists for lifting the cars to ergonomically favourable heights for assembly work, there is nothing in the way of automation at the works. Shane Monger says all production equipment is already paid for and probably amortized.

Approximately 200 parts for the car come from Ford. Upon delivery, these are checked only for any transit damage, such is the faith Farbio places in Ford’s quality control system. The 3.0-litre V6 Duratec is made in the US at the Cleveland 2 engine plant in Ohio. The engine is flex-fuel capable, meaning it can run on E85 ethanol, though using the fuel could mean having to make changes to the ECU.

Intelligent use of outside specialists marks much of the construction of the Farbio. The company has chosen suppliers that are both well established and small enough to be able to customise products for construction of a specific model. The electronic touch-screen display that controls heating, ventilation and audio (as well as satellite navigation, where specified), cleverly solves the ‘kit car’ instrument panel problem, doing away with most of the switches and knobs that can be found randomly scattered over other low-volume models. The wiring loom is outsourced and can be modified to customers’ requirements. The dash panel, door panels, headliner base and A-, B- and C-pillars are made in-house from either carbon fibre or a pre-impregnated glass weave before being shipped to UK trim specialists 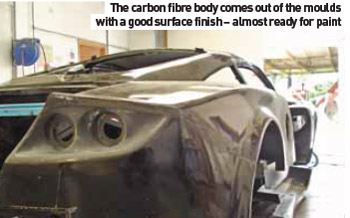 Transcal to be covered in leather or a customer-specified material.

Windscreens for the Farbio are made by Pilkington, while the side and rear glass is produced by Spanish company Vidur. Glass is supplied and fitted by Mobile Windscreens.

A local company, which has a core business replacing cracked and broken glass in standard road cars, Mobile helps specialist carmakers such as Farbio and Noble to source the glass required to turn designs into production reality.

The engine ECU is bought in from MBE Systems in nearby Gloucester, the company tuning in any features required for the three

different model versions, meaning there is no need to ‘flash in’ any data at the end of the production process. Monger: “At the moment we are using an external traction control unit, but we are working on incorporating this into the ECU. As MBE are located near our facility, an engineer will come down to the rolling road with us and make any changes we need to the chip files – we might change chips ourselves, but we don’t modify files.”

AMS usually highlights increases in paintshop efficiency, achieved through automation and reduced drying times. At Farbio, all painting is done manually, completed by a twoman team. Monger explains: “We have two guys in there, one does all the prepping and one does all the painting; we do all the parts of the car ourselves. We use a standard water-based modern two-pack paint. The carbon body has very good A-surface quality and requires very little flatting or filling before paint.”

Like the paint process, build-up of the car is a little different to the production lines usually covered by AMS.

Says Monger: “We have four or five guys down on the production floor, they follow each car through from painted shell with chassis to finished vehicle and testing. We plan to eventually divide final assembly into three sections, two guys on each section, with about 40 hours work in each section.” Total assembly time for each car is about 820 hours, from chassis shop to the car going out of the assembly area.

Farbio aims to raise output to one car per week; it has a full order book with many customers based in the Far East, particularly Malaysia. This will require more staff familiar with the Farbio build processes which, Monger says, are difficult to locate. “The main problem is finding the right people; we are getting more race engineers and mechanics applying as the F1 world contracts, and I can see that we will be getting more people from that area.”

Farbio is fortunate in being able to use the rolling road facility at the nearby Castle Combe race circuit, where the company evaluates ECU settings, etc. Chris Marsh has also taken the car round the Llandow circuit, near Cardiff in

Wales, for evaluation and development purposes.

For the future, Shane Monger sees sourcing qualified staff as the main challenge facing Farbio. Beyond that, he would like to have an autoclave large enough to take a whole car body, and also have the capital to make carbon fibre moulds; at present GRP moulds are used for the body panels. As to the design of the car, he discounts a convertible version, but could foresee a removable targa panel as a possibility.

How does a company this size make money? Monger: “The standard car is not a big profit engine; it makes a reasonable return for us. Some time ago we forecast that most customers would opt for one of the more powerful versions and thankfully, this has proved to be the case. After all, sports cars are all about going faster and harder than the next car and that is what Farbio wants to offer - at a very competitive price.”