Leaders including new CEO Bo Andersson explain why job cuts, facility closures and a shake-up of quality standards are needed to turn the OEM around

In 2016 the Renault-Nissan Alliance aims to be taking a 40% share of a Russian new-car market which, though currently in recession, has the potential to become the biggest in Eurasia and the fifth largest in the world. To achieve this, the Alliance’s four brands in Russia – Lada, Renault, Nissan and the recently re-introduced Datsun – will need to increase their collective market penetration by around 30%.

The four plants the group operates in Russia will need to become fully utilised, especially the desperately under-performing AvtoVAZ facility at Toglatti, the home of Lada. Togliatti is currently producing fewer than 600,000 cars a year, yet is geared up to make more than a million.

Depending on the scale of the total market, the Alliance will have to sell 1.2-1.6m cars a year in Russia to hit that 40% mark. But Renault Russia director-general Bruno Ancelin believes it is achievable, and that the Russian market could be as high as 4m cars a year once the economy recovers, and Western nations lift the sanctions that were applied over the Ukraine crisis.

However, he says there is no direct link between the declining Russian market and the country’s involvement in Ukraine. “It is due to a change in the policy of the government,” he says. “The rouble started to decrease in 2013 after it had been very stable. The rate to the euro now is exactly the same as it was last October, before the Ukraine crisis. Russia is a very erratic market which is currently decreasing quite heavily, but when it recovers it could be just as quick.”

Already the Alliance plans to raise capacity to meet the upturn when it comes. Nissan’s facility at St Petersburg will double capacity to 100,000 a year and increase the number of models from three to five, including the new Qashqai and the next Pathfinder, which will be built with internal combustion and – a first for Russia – hybrid powertrains.

The second AvtoVAZ plant, at Izhevsk in the east, has the capacity to produce 100,000 cars a year and will become the production site of the next Nissan Sentra. Meanwhile, Renault’s factory in Moscow, partially occupying the site of the former Moskvich plant, will continue with a nominal capacity of 180,000 cars a year, although in 2013 it managed to produce 195,000.

Lada and Renault rank first and second in the Russian market, with Nissan fifth, yet the contrast between their fortunes could not be more stark. At times this year, Lada’s market share has dipped below 16% and will not finish much higher when the final figures are declared. But Renault is on the up and, with a share of 7.9% and growing, now commands almost half as much of the market as Lada. Nissan, too, has steadily risen to a position where it holds a 6.5% share.

Replicating a record recovery
If the Alliance is to get anywhere near its targets, the main thrust has to come from Lada, which is why Bo Andersson was brought in as CEO at the start of 2014 to try to perform a similar turnaround to the one he oversaw at GAZ, the Russian truck and bus manufacturer and contract producer of cars. At GAZ he transformed a company which lost $1 billion in 2008 into one which made a record $264m three years later.

Asked if his reforms at AvtoVAZ will follow a similar pattern to the approach he took at GAZ, he gives a one-word answer: “Yes.” Chief financial officer Eugeny Belinin, who followed Andersson from GAZ, is a little more forthcoming. “Eighty per cent of the issues are the same, but at GAZ we could do things more freely. There was not the same attention from the president [Vladimir Putin] and the government,” he says. “Here it is more political. Lada is a symbolic company for Russia.”

Andersson defines his management style as follows: “I break everything down into small pieces and then I give simple instructions”. He has a reputation for slashing costs while improving productivity, working practices, quality and customer service. Already he has made drastic cuts at Lada to align supply with demand. “We had too much inventory,” he told AMS at the recent Moscow Motor Show. “First we have to get competitive. Today we are not competitive. Already we have cut 50,000 cars out of the production schedule and we announced another 25,000. Our people will remain on full pay, but we will use the time to train them in quality essentials." 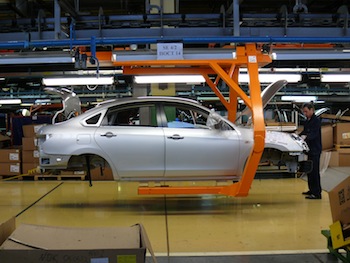 He continues: "From the first of September we have moved 100% over to producing cars only to order. In January we had 60 days’ inventory. Today it is 47 and in a month it will be 40. We were sending out the wrong message. Dealers want cars they can sell.”

The inevitable job losses in such an under-performing organisation are already starting to pile up – 13,000 will have gone by the end of this year, reducing the head count to 53,000 – though not always in expected areas. “There were nine layers of management, and each one of those had a deputy,” Andersson says. “You cannot have 18 layers of management. Today there are five.”

One of the two offices in Moscow has been closed and the remaining staff reduced from 53 to 11, while the 25 drivers employed to ferry managers around have been cut to four. “We build cars for working-class people,” Andersson states. “From the first of August all our top management are driving Ladas instead of their Audis.”

Andersson’s approach seems clear-headed if brutal: “Job cuts are always difficult, but last year we produced only 20 cars per person per year. This year it will be 40, but to be competitive it must be 60.”