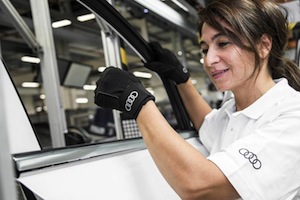 Germany – The ‘production orthoses’, which are claimed to reduce pressure stress by more than 50%, are being trialled at Ingolstadt and Neckarsulm in Germany, Brussels in Belgium and Győr in Hungary. Audi plans to introduce the gloves to series production later this year.

Audi says its car-door assembly workers install around 300 trim strips per shift and therefore experience particular stress in the wrist and the ball of the hand. The orthoses are made of Teflon and feature a shock-absorbent lining where pressure is exerted on the hand, while a highly elastic fastener stabilises the wrist.

The gloves were developed in collaboration with Spörer, an Ingolstadt-based orthopaedic technology company, and an interdisciplinary team from Audi consisting of plant doctors and occupational safety specialists, plus planning and production staff. The development process also involved regular feedback from line workers.

Hubert Watl, board of management member for Production at Audi, said the orthoses demonstrate that “ergonomically designed workplaces have top priority at Audi”. He explained that the gloves will enhance well-being as well as keeping workers “healthy and effective”.

The trials have involved 1,000 workers but by the end of this year the orthoses will be made available to all assembly employees at the four plants.