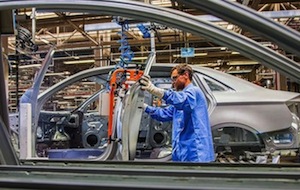 Brazil – The factory at Curitiba, Paraná state, is not only the newest of 13 sites in the Audi production network but the OEM’s first in South America. The plant is now making the A3 sedan and will soon add the Q3.

The A3 sedan 1.4 TFSI Flex is the first Audi model to feature flex-fuel engines which can operate on gasoline, ethanol or both fuels at the same time. In announcing the launch of operations at the plant, Audi noted that Brazil is the world’s largest market for flex-fuel engines, with over 90% of newly registered cars featuring the technology.

“With local production of the Audi A3 sedan and – a few months later – the Audi Q3, we will be ideally positioned to fulfil the wishes of our Brazilian customers,” said Jörg Hofmann, CEO of Audi Brazil. “Since the market launch of the A3 sedan in 2014, we have doubled our sales volume in Brazil and are the market leader in this segment. This is a strong confirmation that we have chosen the right model for Curitiba.”

Bernd Martens, board of management member for Procurement at Audi, noted the “great potential” in the Brazilian market and said the company’s aim there is to maintain a leading position in the premium segment over the long term. He added: “On our global growth path, we will also utilise the potential of high added value in Brazil. So as well as the Audi A3 Sedan, we will soon also produce the Audi Q3 in Curitiba and will procure as many components as possible locally.”