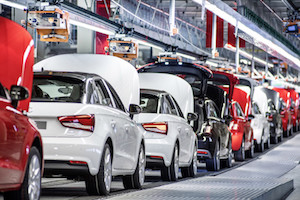 Belgium - The plant in Brussels has been awarded a 'CO2-neutral site' certificate by Vinçotte - an independent company that carries out inspections and audits. According to Audi, this is the first high-volume production plant in the world to receive the award.

"In 2014, we were the first premium manufacturer to measure our CO2 footprint and have it certified," commented Rüdiger Recknagel, head of environmental protection at Audi. "Since then, we have been working steadily to reduce it further. We are also installing new technologies at all our plants to reduce water consumption, prevent air pollution and improve recycling."

The Brussels plant has photovoltaic system installed on the roof to provide green electricity. It covers an area of 37,000 square meters, and helps to prevent around 17,000 tons of CO2 from being emitted per year. Biogas also plays an important role, as it is used to heat the plant and the offices on site. Furthermore, carbon credit projects are used to offset emissions caused by company cars.

The Audi e-tron will enter production at the plant in 2018. A concept version of the electric SUV was first unveiled at the 2015 Frankfurt Motor Show, and is said to come with a range of around 311 miles. The A1 family was exclusively made in Brussels, but the OEM recently announced that it would transfer production of the model to Martorell, Spain.

"As the first plant in the Audi Group purely for electric cars, sustainable and environmentally friendly production is particularly important to us," stated Patrick Danau, managing director of Audi Brussels. "We see this as an obligation to society that pays off for all sides."