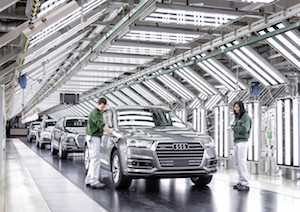 Slovakia/Hungary – The vehicle-maker has announced that it will make the Q8 in Bratislava from 2018 and the Q4 in Győr from 2019. From next year, Audi Hungaria will also take responsibility for the Q3 compact SUV, which until then will be produced in Martorell, Spain.

“We will integrate two completely new Q models into the existing production network and will thus increase our competitiveness in an extremely important segment,” said Hubert Waltl, Audi’s board of management member for Production and Logistics.

The Q8, described by Audi as a “premium SUV in a couple style”, will join the Q7 which has been manufactured at Bratislava since 2005; the large SUV is produced as an S version and the Q7 e-tron plug-in hybrid.

Audi says the Q8 will open up a new segment for its top-end models. Meanwhile, the coupe-style Q4 will bring the brand into the segment of compact utility vehicles.