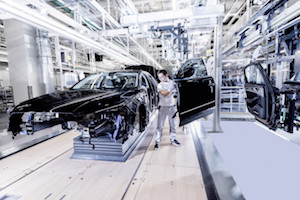 Germany – The carmaker invested in additional body construction and assembly facilities for the new model, strengthening the ability of the plant to make large sedans. Completion of the upgrade took 17 months from groundbreaking.

According to Audi, the new bodyshop was a particular planning challenge. A roof was built over the railway loading station in the north of the site during full operation. Moreover, up to 17 cranes were used simultaneously, including some capable of lifting 600 tons. “With these structural measures, we are advancing the strategic development of our plant and preparing it for future challenges and technologies,” said Helmut Stettner, plant director.

“Our sites in Germany are our backbone,” added Hubert Waltl, member of the board of management for Production at Audi. “That’s why the investments in the production of the Audi A8 flagship are an important milestone for the Neckarsulm site, and also for our entire company.”

The modifications to the plant included moving its boundary and integrating a former building yard to create the new production area. Inside the facilities, electric hanger straps are height adjustable and rotatable to improve the ergonomics for personnel. Neckarsulm has been producing the A8 since 1994, when the first generation was launched.