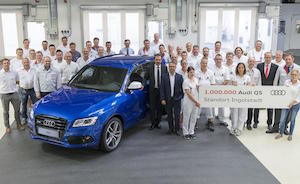 Germany – The milestone vehicle was an SQ5 in Sepang Blue, which was dispatched to a domestic customer. The Q5 mid-range SUV was launched in 2008 and is now also produced in China and India for the local market, meaning that almost 1.6m units have been delivered worldwide.

The Ingolstadt plant makes more than 650 Q5s per day. The factories in China and India are based at Changchun and Aurangabad respectively, while another plant is due to open in Mexico at San José Chiapa in September this year; Ingolstadt is the lead plant for this project.

Last year, Audi delivered 266,968 Q5s to global customers, representing an increase of around 8% compared with 2014; sales have risen by 4.7% in the first half of 2016. The biggest markets for the Q5 are the US, Germany and China.