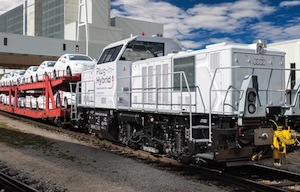 Germany – The 1,000hp, plug-in locomotives from Alstom will replace conventional versions for the transportation of components and finished vehicles. The move will help the plant to become quieter, cleaner and more efficient, says Audi.

The OEM’s Ingolstadt site includes 18km of railways and employs 17 locomotive drivers. Fifteen trains arrive at the plant each day, carrying pressed parts, engines and transmissions, plus cars made at other Audi locations. Ingolstadt also uses the railways to begin the delivery of its own output to customers.

The new locomotives can operate inside the plant buildings without any emissions, lasting for two hours in purely electric mode. Their batteries are plugged in during breaks for recharging or are complemented in motion by diesel engines.

According to Audi, hybrid locomotives are not only quieter but reduce emissions by half in comparison with conventional versions, meaning 60 tons of CO2 fewer per vehicle each year. The OEM said the introduction of the hybrids at Ingolstadt is “another stage on the way to the CO2-neutral factory”.