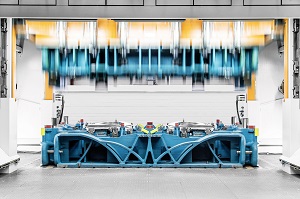 Germany – The company’s tooling specialists have developed a new generation of tools that they say are up to 20% lighter and 10% more stable than the previous generation. Now being used in the press shop at Ingolstadt, the new tools feature a composite construction consisting of cast iron, aluminium and plastic, and are up to eight tons lighter than conventional tools made completely of cast iron, which can weigh up to 45 tons.

Audi claims the new tools allow faster, more precise processing of sheet metal, experience less wear and tear, and are significantly more stable despite their lower weight. The company says it has achieved an energy saving of over 10% by using the new tools.

In addition to the materials used, the construction of the new generation of tools features individually adapted arched shapes in the basic structure that offer optimal stability and improve the transmission of forces. The optimal distribution enables a 20% saving in material. Audi says many of the new tool geometries have been inspired by natural structures such as leaves and human bones, describing them as "bionic shapes".