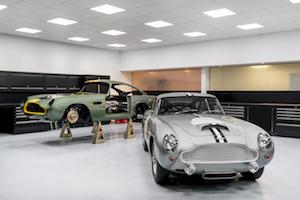 UK – The OEM is to build a special run of 25 DB4 GT Continuation cars at the site where the original DB4 GTs were made almost 60 years ago. Aston Martin described the move as “another landmark” in its ‘Second Century Plan’.

“For more than half a century, Newport Pagnell was the heart of Aston Martin. Thanks to the efforts of those at Aston Martin Works it has since become the torchbearer for our Heritage division,” said Andy Palmer, CEO Aston Martin. “It’s immensely satisfying and wholly appropriate that this historic, yet state-of-the-art facility should now form a key part of our expansion.”

The OEM moved to purpose-built headquarters at Gaydon in 2003, leaving Newport Pagnell as the home of Aston Martin Works, with responsibility for heritage sales, services, spares and restoration. Production of the Mk1 Vanquish stopped in 2007.

The DB4 GT Continuation project was announced nearly 12 months ago and the first deliveries of the track-only, lightweight vehicles have now been achieved. Each car requires 4,500 manhours to build, in a process that Aston says combines “absolute authenticity and old-world craftsmanship with modern techniques and performance enhancements”. The remaining cars will be assembled and delivered in 2018.

Palmer noted also that the OEM’s new site at St Athan, acquired in 2016 for production of the new DBX SUV, was “progressing towards completion”.