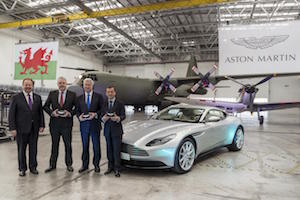 UK – The facility in Wales was officially handed over to the OEM by the Ministry of Defence so that it can begin Phase II of the redevelopment and remain on target for the production launch of its new SUV, the DBX, in 2019. The plant will become Aston Martin’s second manufacturing location in the UK.

“Due to its sheer size and scale, the St Athan Super Hangars represented an excellent opportunity for us to build our second manufacturing facility, within the envelope of an existing structure,” commented Andy Palmer, president and CEO of Aston Martin. “It is perhaps fitting that St Athan is, like our headquarters and sports car factory at Gaydon, a former Royal Air Force base.

Phase I began in late 2016, when Aston Martin gained access to part of the site and started to build administrative areas. Phase II will see the redevelopment of the three large hangars into a state-of-the-art manufacturing facility.

St Athan was selected from 20 sites worldwide for the location of its new plant, which is part of the brand’s growth strategy, Second Century Plan. By 2020, Aston Martin plans to add 1,000 personnel across its two sites, creating an estimated 3,000 more jobs along the supply chain.