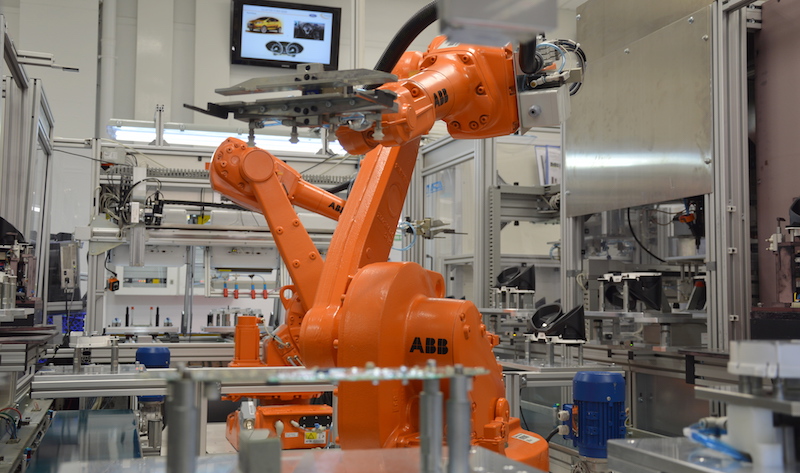 From Palmela, its key European production base and centre of excellence based on the outskirts of Lisbon, Visteon supplies to almost every OEM in the market. Half of the Palmela plant’s output concerns instrument clusters and displays with the remainder comprising mostly audio and infotainment. The components are shipped, in their millions, to the automotive plants of Europe, with Ford and JLR receiving the largest consignments by far.

Giles Tayler, senior manager for manufacturing strategy at Visteon, says the company’s three tiers of innovation all play their part. “We have to listen to all three groups: the line operators, the guys responsible for the plants, and those trying to define global strategies,” he explains.

There’s a central team that essentially looks at forward model innovation and global design directives, trying to ensure the rest of the Visteon organisation is adhering to best practice. At a site level, Tayler acknowledges that some of these technologies can only be developed at a plant and feedback from operators is an equal part of the process.

“You can’t force a technology on a plant that doesn’t have the ‘intellect’ to pick it up – you have to recognise the capabilities of each individual site,” he elaborates. “There’s also the guy who stands in front of the machine every day, who realises that something is consistently going wrong at, say, every 500th component. Why is it going wrong at component 500 repeatedly? You can only get that by listening to the guy standing on the line.”

There is a vendor list at each Visteon plant, it’s not consistently the same throughout the world but varies to reflect the service levels experienced from a given supplier in the locality.

“The amount of support you get from a vendor in Asia is not the same as you would get from them in northern Europe or the US. That’s where you have the advantage of being a global technology group, to help define that vendor list, working in conjunction with our head of purchasing, who also reports to exactly the same guy as we do in manufacturing,” Tayler explains.

“No-one is sitting in an office, far from any manufacturing site, saying ‘well I wrote down the two suppliers, I don’t care where you are, it’s got to be one of these’ without any consideration for the local requirements.”

As Tayler stresses, this interdependency is deep-rooted and essential: “Production needs absolute faith that the components are there; warehousing and logistics need to trust production; everyone needs to trust one another and be connected to one another for a seamless process. It enables us to reduce the amount of warehousing – as soon as components are received, they are essentially produced – as soon as they are produced they are essentially shipped. That creates a huge amount of efficiencies but it’s very difficult to get right.” 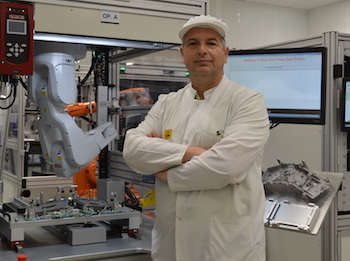 Plant manager at Palmela, Paulo Iglesias adds: “You’ll see no buffers in our facility – we start and finish, there is no area with thousands of buffer supplies – it’s very lean. Is it difficult, sure; does it give us results? Yes, it does.”

Tayler and Iglesias explain how Porsche is one such beneficiary of the lean performance. Porsche provides an instrument cluster order schedule each morning which is uploaded to the Visteon bespoke software managing a robotic assembly cell. Tayler says: “For this cluster, there are something like 34 different part numbers, so that’s 34 different tweaks: kilometres an hour, miles per hour, sport version, e-boost, etc. All these variants come in any sequence the customer wants.”

The daily order is uploaded, built and then packed to the prescribed sequence, helping the customer – in this case, Porsche – deploy the components with less fuss and process on receipt. “At the point where the guy at Porsche takes them out of the box, they are in precisely the order he needs to pass to the line,” Tayler says.

ThixomouldingThe heat generated as a result of the processing power of modern instruments and high intensity displays prompted Visteon to moving from plastic housings to thixomould housings. Tayler says, “The die cast option was felt to be unsuitable for safety considerations. With thixomoulding, you never truly melt the magnesium. It is compressed and heated to a point where it’s semi-solid and the final results are very light, the EMC properties are excellent and you can create geometries that are very advanced.”

The PRACVisteon developed bespoke software to power the Palmela robotised assembly cell (PRAC) to assemble and ship in as short a time as possible. Iglesias explains: “We developed internal software, so we can upload a customer schedule direct to the PRAC. The system tells what the part number is being built and the parts are brought to the PRAC in sequence.”

The PRAC itself is an enclosed unit with robots deployed within, driving the flow of the component through the process. Meanwhile human operators are stationed outside the chamber, accessing the component via swiveling panels to perform more discerning assembly stages but returning it into the chamber for the next automated task.

The robots and human operator work in sequence to take the component from the bare box to fully assembled instrument cluster. The robots undertake screwing and soldering as well as presenting the unit to the vision system for quality checks, for both its own and the human-operated stages.

“We have continuous flow lines for PCB – our philosophy is don’t touch the PCB – touch it you might damage it!” Tayler explains. “So if you can run in a continuous way, load on the bare board and pick off the final board, already routed and populated on both sides, untouched, that is the safest and highest quality solution. There are a lot of people that have different philosophy but we believe that if you run a continuous flow in a very controlled manner you can be more efficient that other methods but you are also driving quality.”Iglegias describes the PRAC flow: “The first thing we do is to place the board, the robot then picks and places the component in the next station where the appliqué and LCD is placed by hand.” 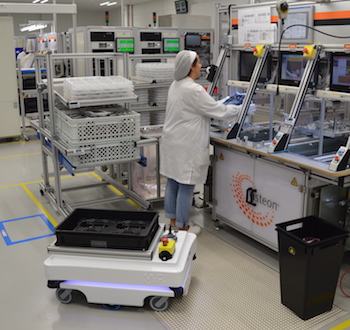 Despite the versatility of the robots, there are still tasks where hand placement is best, Iglesias explains. Developing an automated system for such delicate jobs would work against the big advantages that PRAC has provided in terms of labour and quality.

Tayler stresses that PRAC is a high volume line: “At 400,000 units a year, this is running as fast as it possibly can – faster than the original targets and with half as many people as the previous U-shaped line.”

As a mini network in itself, the only way that Visteon could get the communications to work fast enough between the different stations was to create its own mini Internet of Things.

“If we had bought the system off the shelf we couldn’t have evolved it. So we had to develop it from the plant upwards. The concepts are now being shared across our sites. Palmela is the first with this solution, our JV in China now has its related solution. It is different because its volumes are not at the level 400.000 units, most are 100.000. But they have the ability to build two products on exactly the same line, they have different stations but you have two robots working in tandem, building two completely different products. They won’t be thrown by huge rises in volumes, the platform is there.”

Despite the regional requirements being different, Visteon wants to implement best practice, rolling out the best ideas and future-proofing plants worldwide.

Industry 4.0As the PRAC and other systems across the Palmela plant have shown, Visteon are content to take a case-by-case approach to automation and the wider application of Industry 4.0. The important thing, Tayler says, it to recognise how close the process is to 100% performance. If 90% is reach and significant investment will take that to 92.5%, the company needs to consider and calculate whether it’s a viable change. “That’s an evolutionary thing, a neverending road we are on, but the fact that data is being produced in the formats that we need and communicated to anyone with access. They then have the ability to look at, say, regional performance or individual plant performance and see which of the metrics is driving any performance and give the opportunity to react.”

A new cleanroom line at Palmela is handling optical bonding for flat panel displays. This technique has been used for some time in other areas such as smart phones and tablets but is relatively new within automotive components. Visteon was among the first automotive suppliers to introduce it at its Hiroshima plant for Mazda in 2014.

The new capability at Palmela will service a new order from Daimler. In simple terms, the purpose of the clean room to glue a piece of glass to the display. The loca (liquid optical clear adhesive) technique offers improved the readability of cockpit displays in bright sunlight. It also removing the touch-ripple common on LCD screens, as there is no longer an air gap behind the glass.

After accurate camera alignment of the two parts, the top surface is optically bonded to the bottom surface by a slow top-down motion, controlling the spreading of the adhesive across the display image area.

The loca smoothly fills the space between the two parts with no voids or wetting defects, bubbled are removed by vacuum. The loca is then cured at a moderate temperature (60ºC) for 15 minutes. Curing results in full polymerisation of the adhesive, ensuring a good fix and the required optical properties. The bonded sub-assembly can go to the final assembly of the display module with its electronic board and covers.