The first issue of AMS noted that General Motors had, in 2000, already been using simulation tools for over a decade. At plants around the world the company had put various software packages into widespread use in applications ranging from developing robot workstations to analyzing ergonomic issues.

Adoption of the new technology was fairly haphazard, according to Richard Woodhead, Director of Manufacturing and Industrial Engineering Systems at GM, with each region deciding on how the technology would be used. Through virtual manufacturing, GM looked to deploy a set of common tools and best practises in order to pull the separate pieces together. 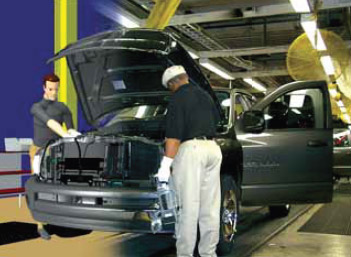 “We are taking advantage of our size and surveying the entire globe for best practise techniques,” said Clif Triplett, then Global Process Information Manager. “At the same time, we have evaluated the virtual manufacturing tools available on the market and have identified a set of tools for use throughout the organization.”

While this unified, cross-region installation would clearly reduce capital investment and improve information exchange, the underlying project goal was to speed up the vehicle development process.

“Everyone in the vehicle manufacturing sector is trying to reduce vehicle development times,” commented Woodhead. For GM, this meant reducing the standard time from concept design to new car in full production down to 18 months – or less.

GM was also hoping for other spin-off benefits, including an improvement in overall vehicle quality.

“We are able to test everything before going into production, thereby catching mistakes and defects early on. We’ll be able to make all corrections before any vehicle gets to the customer,” said Woodhead, who further anticipated eliminating 60% of the engineering changes associated with a vehicle development programme.

Getting the full picture

PSA Peugeot Citroen installed its own virtual reality centre in 2000, with the goal of giving designers and engineers sufficient experience with the technology that they would have the confidence to make key development decisions based on virtual reality.

Said a company spokesperson at the time: “What we want is to get to a single physical prototype at the surface definition stage.

Today, we have two. First we make a prototype by milling it from the digital model, and then we introduce clay and modify it. Our goal is to avoid adding the clay.”

Based in Velizy, France, the PSA centre was first used to manipulate digital images at the vehicle styling stage, but it was hoped the technology would eventually assist in a wide range of disciplines. PSA, though, looked forward to when the prohibitive price of the technology would be reduced by standardization.

In 2000, the SGI Reality Center 3300W created by Silicon Graphics was priced $150,000, which included a multi-projector 52 sq ft screen with 5 million pixels. The first customer, Mercedes- Benz, reported it a great success.

“Our experience with virtual reality has already proved itself as far as communication is concerned,” said Bharat Balasubramanian, the director responsible for the overall design process. “The fast, direct option of working together to solve problems has an effect on how people get on with one another and how motivated they are in their work,” he added.

As well as the standard screen, Mercedes-Benz had a further three viewing platforms: a Powerwall measuring 7m x 2.5m; the Cave, incorporating screens on the floor, ceiling and three walls, each 2.5m long, designed for spatial interaction analysis; and a cylindrical projection area measuring 7m x 4.4m, with panoramic projection capability, used for the verification of materials and instruments.

As virtual reality systems reduced vehicle development times, engineers were faced with the problem of making production lines for these new models with equal speed.

Using similar technology it was not long after design studios received their first vehicle development systems that engineers began to design, test and implement virtual workstations on simulated production lines – sharing data in real-time with colleagues at remote locations.

Identifying this advantage, Kate Mills, UK Marketing Director at EDS Solutions, said in 2002: “Probably the most significant area of development in terms of software technology at the moment is that of collaboration.” Martin Reeves, a consultant for the manufacturing sector of Syntegra, echoed the principal benefit for suppliers. “Most Tier One automotive suppliers expect virtual collaboration to shave 18% of their product development costs by 2003,” he said.

Dassault Systemes was one of the first companies to offer such integrated product lifecycle management (PLM) systems. They linked software tools such as Catia (for product design), Enovia (for data management and lifecycle applications) and Delmia (for defining and validating the manufacturing process and factory layouts). Each fed the company’s Product, Process and Resource Hub (PPR Hub) in order to facilitate data sharing.

Linked to the hub, manufacturing engineering teams were assured of working with the latest data, without having to wait for data transfers or prints. Additionally, Delmia’s Process Engineer software allowed teams to determine best practice processes.

Based on conceptual product data and developed as feasibility studies, teams could determine the optimum solution based on local constraints.

Delmia identified the customer benefits of using its system as numerous. They covered: a decrease of work-in-progress inventory; shortened lead time; the reduction of floor space usage; fewer workstations; and a resulting reduction in capital and operating costs.

By 2005 AMS was reporting that DaimlerChrysler had taken perhaps its greatest step yet into the digital world by signing a multi-million euro contract with Delmia to establish what it described as its ‘Digital Factory’. 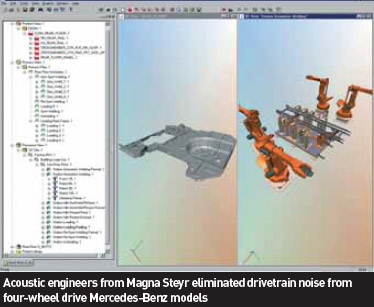 Even before the DF agreement, DaimlerChrysler had been successful in developing a number of new digital standards in deformation simulation, assembly line cycle time optimisation and the layout of robotic cells.

With the completed deal, the company had met its own target of total digital vehicle verification. Every new model proposal passed virtual quality tests, budgets and timing before final approval would be given for the real-world fabrication of buildings, stamping tools and production line stations.

In 2008 GM made its own significant step into fully-digital manufacturing by starting its first programme of virtual production. The new Delta Assembly Center in Lansing Michigan, saw the Saturn Outlook, GMC Acadia and Buick Enclave as the first GM vehicles to be validated using virtual design and production templates.

“We share actual designs, processes and work tools globally,” said Joe Kaczmarek, GM’s Director of Manufacturing Technology. “The pipeline has moved past vehicle design into manufacturing engineering and the plants themselves,” he added. It was the culmination of 12 years of development.

Despite this increased use of digital manufacturing technology, the tools remain under-used today, though this is likely to change as manufacturing decision makers come to terms with a technology that is, in an ever-changing form, here to stay. Ray tracing to produce life-like three-dimensional models is one such development.

But problems with moving away from legacy systems still remain, as do the challenges of opening communications channels between development areas that were previously silos of information.

It is, though, inevitable that, as in the GM example, operations such as dies, stamping, welding and paintshop will become digitally unified through virtual systems, allowing carmakers to continue to benefit from improved design tools and production validation.