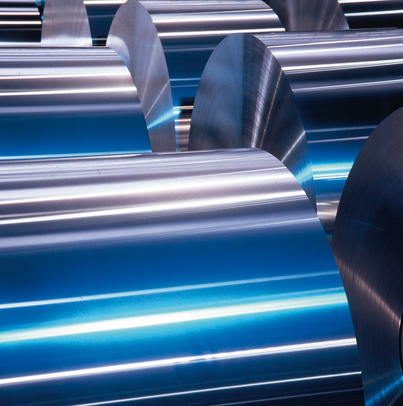 To the casual observer, there is nothing extraordinary about Ford’s announcement that it will be using aluminium instead of steel to produce the body of its 2015 F-150 pick-up truck.

After all, the lightweight metal has been used to fabricate automotive components for decades. For example, Audi – in partnership with Alcoa – started to develop the aluminium chassis of the A8 in 1982, and series production of that vehicle started in 1994.

Furthermore, Jaguar Land Rover (JLR) – currently at the forefront of automotive aluminium development – makes extensive use of aluminium in its XJ, F-Type and Range Rover models. The company will employ a full modular aluminium architecture in its forthcoming XE sedan and operates what it claims to be the largest aluminium bodyshop in the world.

However, these offerings are all luxury vehicles with annual production runs in the tens of thousands. Ford’s F-150, on the other hand, has been the highest-selling car of any kind in the US for the past 32 years. In this market alone, more than 760,000 F-Series pick-up trucks were sold in 2013.

“We are at the beginning of a historic shift in the way cars are built. The Ford F-150 is just the tip of the iceberg.” – Randall Scheps, Alcoa

The director of marketing for automotive at Alcoa, Randall Scheps, says: “We are at the beginning of a historic shift in the way cars are built. The Ford F-150 going to a full aluminium body construction is just the tip of the iceberg.” The aluminium industry predicts that demand for the metal from carmakers will more than double by 2025, driven by tougher fuel economy standards in both the US and the EU.

Laurent Musy, president of Constellium’s Packaging and Automotive Rolled Products business unit, comments: “In the US, the updated Corporate Average Fuel Economy [CAFÉ] regulations now apply to medium and heavy-duty trucks, which is likely the reason Ford decided to use aluminium in its new F-150 pick-up truck. The CAFÉ standards, which will become even more stringent by 2016, are also spurring automotive manufacturers to [reduce the weight] of high-volume cars.”

Constellium estimates that the US market for aluminium rolled products, to be used in automotive body-in-white (BIW), could grow from under 100,000 tons in 2012 to approximately 1m tons in 2020. In Europe, it expects the BIW market to grow by about 12% a year to more than 600,000 tons in 2020. Alcoa’s Scheps says: “The main change is the move from aluminium hoods into doors and full car bodies.”

Developing alloys
Aluminium suppliers and OEMs are working at a furious pace to develop alloys with the increased strength and formability required by these new applications.

The main alloys used in automotive body panels and BIW are from the 5000 and 6000 series. The 5000 series are alloyed with magnesium, and represent 37%-by-weight of the body of JLR’s aluminium-intensive Range Rover. The 6000 series are alloyed with magnesium and silicon, are easy to machine and can be precipitation hardened, and are increasingly being used in automotive applications. They represent another 37%-by-weight of the Range Rover body (the rest of the body comprises 15% castings and 6% extrusions, with the balance made of steel).

JLR uses Novelis’ Anticorodal (AC) 600PX for the production of the body side pressing on the Range Rover, which is the largest one-piece aluminium body panel in the automotive industry. As it has been subjected to a pre-ageing treatment, the alloy gets stronger as it is put through the paintshop, where it is heated to 180ºC – stronger than a 5000-series alloy. Additionally, it is more ductile, meaning that it can be used to make parts with more complicated geometries.

Novelis’ high-strength AC300T61 is used to produce the Range Rover’s safety-critical crash structure. The alloy demonstrates a typical in-service strength of around 225MPa – some 85MPa higher than JLR’s default NG5754 alloy. In comparison with NG5754, AC300T61 absorbs 30% more energy per unit length, enabling it to be used in thinner gauges. As a result, JLR claims that it can make components that are 20% lighter and 9% cheaper than those produced using NG5754. Indeed, crash management structures (CMS) could be a big growth area for the use of aluminium. The president of Constellium’s Automotive Structures and Industry business unit, Paul Warton, says: “Analysts expect aluminium to account for 30% of the CMS market in the EU and nearly 20% in the US by 2018.”

High-strength aluminium
In February 2014, Constellium announced the launch of a high-strength aluminium CMS technology designed for application on both the front and rear-ends of vehicles. According to the company, its CMS systems demonstrate high strength and similar physical properties to 6000-series aluminium alloys, including formability, corrosion resistance and energy absorption.

Producers of aluminium and the OEMs using the material are also increasingly keen to reduce the CO2 emissions associated with the manufacture of aluminium components. To this end, JLR has developed RC5754, which contains up to 50%-by-weight scrap from its in-house processes. RC5754 will become the default grade on all of JLR’s forthcoming vehicles – including the Jaguar XE – and will replace its NG5754 grade. Furthermore, the company plans to introduce this recycled alloy retrospectively into its current models.

The automotive industry’s demands of cast alloys are evolving in a similar manner. UK-based JVM Castings die-casts components for JLR, Ford and BMW. Its group design director, Simon Ruffle, says: “[Cast] components are now required to be thinner, lighter, and stronger, and have a greater integration of features.” JVM has been producing parts for JLR for over 50 years, and initially began producing die-cast aluminium B-pillars for Jaguar’s XK model using a combination of B-post and swan neck castings.

When Jaguar announced plans to build its F-Type model in 2010, JVM’s team was tasked with re-designing the B-pillar structure as one single casting that would avoid the need for sub-assembly. “The challenge facing our designers was to create a feed and runner system that would successfully make two different castings at the same time. Our finalised design reduced the total assembly weight by more than 50% and [eliminated] the cost and weight of seven steel pressings, as well as the cost of assembly. Rather than two dies and seven stamping tools, our new B-Pillar only requires one die set.”

Casting large components
JVM is currently working on several research projects, the results of which should help it to meet the demands of the automotive industry. For example, it has partnered with JLR and Worcester-based Aeromet International to devise methods for the casting of large components made from a high-strength alloy called A20X. Developed by Aeromet, A20X is a modified version of the aluminium/copper alloy A201. It demonstrates a yield strength of up to 440Mpa, a tensile strength of 500Mpa – making it the strongest cast alloy currently available – and an elongation of 3–5%. According to Aeromet, A20X eliminates the problems associated with the poor castability of the aluminium/copper alloys, yet possesses a fluidity comparable with aluminium/silicon alloys such as A357. 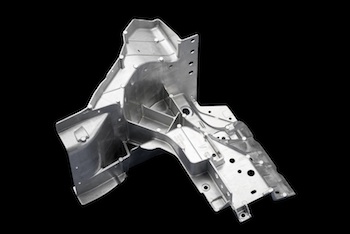 As the use of aluminium body structures increases, new joining and assembly methods will need to be developed and refined. Adhesive bonding methods are gaining in popularity, but an intrinsic and beneficial characteristic of aluminium – that a thin layer of aluminium oxide forms on its surface when it is exposed to air, which increases its resistance to corrosion – can affect the quality of these bonds, meaning that the metal must be pre-treated first.

Alcoa claims to have developed a pre-treatment, called Alcoa 951, that increases the durability of adhesive bonds by up to nine times when compared with conventional conversion coating systems such as the titanium zirconium. The treatment, which does not contain any heavy metals that could be damaging to the environment, is applied using an immersion or spray. Alcoa says that 951 is essentially ‘transparent’ to downstream steps in the automotive manufacturing process, such as forming, resistance spot welding and painting. The company has licensed the product to Chemetall for global distribution.

It seems that aluminium could become the material of choice for carmakers looking to reduce the weight of their vehicles, but what challenges must be overcome for it to become a truly mass-market material? The higher cost of the metal in comparison with steel is certainly an issue. However, Ruffle says that "once you take the overall costs into consideration, factoring in elements such as recyclability and pollution, then the use of aluminium in the automotive sector is becoming increasingly competitive".

Scheps is more bullish. He believes that the biggest challenge facing Alcoa is having enough production capacity to cope with the carmakers’ rapacious demand for its products. In January 2014, the company completed the $300m expansion of its aluminium sheet facility in Iowa, and in August 2013 broke ground on a $275m expansion of its automotive operations in Tennessee.

In the past twelve months, Novelis and Constellium have both invested hundreds of millions of dollars in the production of aluminium for automotive applications. Constellium’s Musy says: “We believe there is a significant opportunity for advanced aluminium in the automotive market, both in the near and long term, and we have made significant investments to maximise this opportunity.”