AGVs stray from the fixed path

AGVs have been rather a Cinderella technology; invented some 50 years ago and known as ‘driverless systems’, they have seen advances in electronics start to catch up with their potential for autonomous material handling. Technological developments may have given AGVs more flexibility and capability, but it is growing market acceptance that has pushed independently-controlled vehicles to the forefront of material handling.

As with any new technology, there is an underlying need for more information about how these systems work, what they and can’t do and how to get the most out of them. This requires experts familiar with the technology, readily available with other, more well-known material mvement solutions such as conveyors or a tow chain system. Automatic guided vehicle systems can help automate material handling even if a plant’s throughput does not warrant fixed-path conveyors. Suitable for short or long distance moves, automatic guided vehicles can actually improve response time for material movement. AGVs are typically used to move pallets, drums, boxes, totes and skidded items throughout various areas in production, manufacturing or distribution facilities. The most common use is when all load transfers are to or from a stationary conveyor. The vehicle provides the flexibility of connecting stationary conveyors with other conveyors or receiving stations without the physical requirements of a traditional conveyance system. This frees up valuable floor space and allows the flexibility for change in the production process.

Multi-functional AGV solution
Chrysler’s Belvidere, Illinois plant uses 15 conveyor deck, 15 autocart and 15 tugger SGVs (laser-guided instead of fixed-floor guidance), to pick and load racks of components, including instrument panels and body parts to lineside conveyors. Maximum throughput is 27 deliveries per hour. The machines come from JBT, a new company formed from the non-energy groups of FMC. 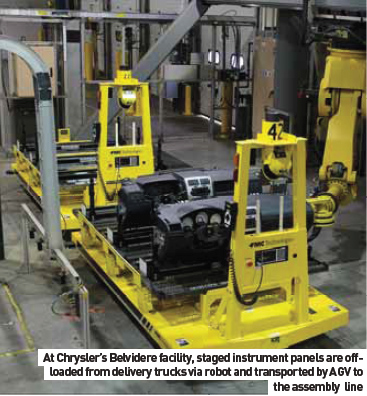 Conveyor deck SGVs operate in the trim and chassis final (TCF) area of the plant, transporting racks of engines, dampers, struts and suspensions from the manual receiving dock conveyors to lineside conveyors. The conveyor deck vehicle picks up loads from eight receiving dock linear conveyors and delivers them to drop locations at the lineside indexing conveyors.

Autocart SGVs also operate in the TCF area of the plant, transporting racks of instrument panels from the automated receiving dock to lineside conveyors, and returning empty racks. Dock stripping equipment in the form of a robotic arm loads and unloads powered over-the-road trailers, placing materials directly on to the autocart vehicle. The autocart also interfaces with accumulation conveyors at each lineside operator station.

Compressor maker benefits from new routes
An AGV system has been developed for air conditioning and refrigeration supplier Copeland, using the Nuyts ‘motormouse’ Intelligent Assembly System (IAS) to move condensing units within the plant. These AGVs allow improved accessibility during assembly and increase flexibility between stations to create a ‘pull’ production environment.

The installation uses 18 vehicles, each with a load capacity of 350kg, traveling at a top speed of 1m/second. The units use a passive-inductive, magnetic floor-controlled guidance system, or they can be optically guided.

Copeland required AGVs that would be used for production within a ‘flow’ environment; the AGV system was designed primarily to eliminate barriers, such as fixed conveyor systems. This increased flexibility and enforced the ‘one-piece’ flow. The system further incorporates a rotating platform, used to improve access during assembly. At the end of the production line, a simple transfer method is used to move the condensing units from the AGV to a conveyor system.

Layout and software
The loop is approximately 150m long and is designed so that both AGV and forklift traffic is controlled. The PLC software is written so that AGVs can service new machines by simply placing new stop codes in the machine. The AGVs use Nuyts’ unique, 50mm-wide passive-inductive guidance system in warehouse areas, the space further complicated with heavy forklift and pallet-moving traffic. The AGV is equipped with a 4-bit coding system and supports up to 15 floor-code initiated processes. An additional 8-bit transmitter is fitted to the vehicles so that load transfers can be quickly and reliably negotiated. 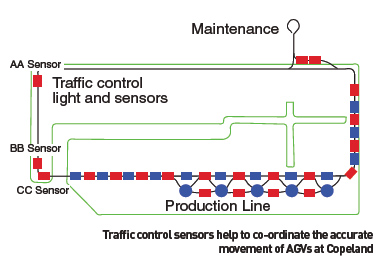 During the process, an AGV moves onto the first station after the previous AGV has moved on to the following area. The condensing units are assembled at successive stations. Where there are variations in work content, time parallel stations are used to maintain the takt time. As the AGV moves along the assembly line it stops automatically at each station, missing stations as requested. At parallel stations, the operator can send it along the parallel line or back onto the main line. At parallel stations, the condensing unit is rotated on the AGV to allow the operator to carry out work. Assembly operators restart the vehicles by using a foot switch.

Upon reaching the end of the assembly process, the roller conveyors on the AGV are unlocked, allowing the operator to unload it. The unit can then be sent onto the maintenance track or continue on the return track.

The AGV stops at the traffic control sensors AA (see diagram). This vehicle will move onto sensor BB when the vehicle at sensor BB has moved onto sensor CC and the vehicle at sensor CC has moved onto the first station. This automatic chain of movements is started when the operator at the first station completes his work and moves the vehicle onto the next station. A simple traffic light system is used to control forklift traffic.