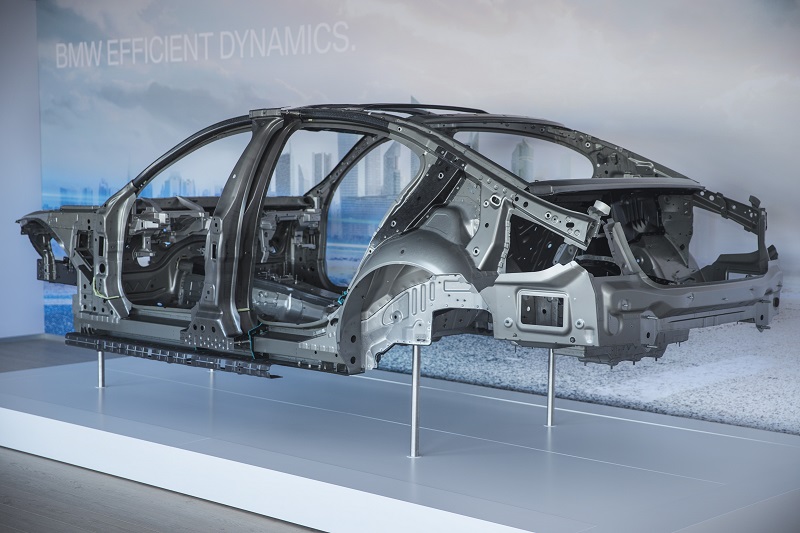 Earlier this year, BMW announced that it would make extensive use of carbon-fibre reinforced plastic (CFRP) in the chassis of the next generation of its 7 Series luxury sedan. The new models will be up to 130kg lighter than those they replace, despite an increase in the amount of passenger comfort and safety equipment. As well as cutting fuel consumption and CO2 emissions, this weight reduction lowers the vehicles' centre of gravity, improving handling.

According to Jürgen Köhler, CEO of SGL Group, which is a key partner in BMW's CFRP projects, “The use of our carbon fibre-based products in the new BMW 7 Series is another milestone in the large-scale serial application of carbon materials in the automotive industry.”

CFRP is also employed in the hybrid roof frame of the vehicle. The carbon fibres for this application will be produced by SGL Automotive Carbon Fibers (SGL-ACF) – a joint venture between BMW and SGL Group – at its plant in Moses Lake, Washington, where capacity has been ramped up steadily over the last few years. Preforms will be manufactured from these fibres using a fully automated textile production process. The preforms will then be delivered directly to BMW Group to be converted into CFRP parts.

CFRP is used in the hybrid roof frame of the new BMW 7 Series
SGL Group is also providing carbon-fibre fabrics and recycled materials manufactured at the SGL ACF site in Wackersdorf, Germany. Developed in cooperation with BMW, these recycled carbon-fibre products will be used in the C-pillar and in the boot compartment partition.

BMW says that its experiences in manufacturing the CFRP-intensive i3 and i8 models – and the related infrastructure it has put in place – have been key in enabling this development.

The overall volume of carbon fibre used in the new BMW 7 Series makes it the second-largest serial CFRP production project in the automotive industry, after the i models.

Design, production and assembly
The stiffness and light weight of CFRP make it an ideal material for the production of structural automotive components, but its wide-scale use requires a complete change in how these parts are designed, produced and assembled – a significant investment for carmakers.

Announced in 2010 and sold in very limited numbers since, Lamborghini’s Sesto Elemento (Italian for ‘Sixth Element’) is one of the most striking examples of what can be achieved through the extensive use of CFRP. Based on the Gallardo and built around a CFRP monocoque, the Sesto Elemento’s 562bhp V10 propels the 999kg vehicle to 100km/h in just 2.5 seconds and on to a top speed of 300km/h. Further to achieving this astonishing performance, the production of the Sesto Elemento enabled Lamborghini’s engineers to test a variety of technologies for the manufacture of CFRP parts.

The company has a long history of using CFRP in its vehicles. The Murciélago, in production from 2001 to 2010, featured approximately 31% (by structural weight) carbon-fibre reinforced epoxy prepregs. These materials were used for all of the outer body panels and some internal structural parts, which were bonded to a steel spaceframe.

Cost versus volume
In building this vehicle, Lamborghini noted the high cost associated with laying up the CFRP plies for these structures and the lengthy autoclave cure they required. However, the company determined that this process was adequate for the Murciélago, the production rate of which was approximately 400 units per year. 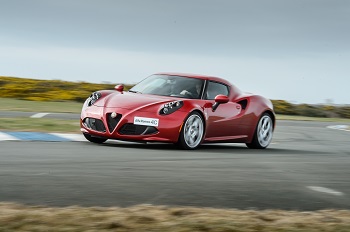 The Alpha Romeo 4C weighs 895kg and features extensive aluminium and low-density sheet-moulding compound
The Murciélago’s successor, the Aventador, was unveiled in March 2011 at the Geneva Motor Show, and features an all-composite monocoque design containing 50% carbon fibre by structural weight. This design dramatically increases the torsional stiffness of the vehicle and improves its crash behaviour in comparison with the Murciélago.

Forged composite
One of the major innovations that Lamborghini introduced on the Sesto Elemento is a material called Forged Composite, which is employed in the vehicle’s monocoque and suspension arms. Developed in partnership with golf club manufacturer Callaway, the discontinuous fibre-reinforced material has been designed to enable the production of CFRP parts in higher volumes.

Forged Composite is based on a carbon-fibre reinforced sheet-moulding compound (CFSMC) supplied by Quantum Composites. It is made of 25.4mm-long carbon-fibre tows (53% of the weight of the material), randomly distributed in a mat and sandwiched between two layers of vinyl ester resin. This stack is compacted between rollers into sheet form, and spooled onto rolls similar to standard prepreg.

The material is designed for compression moulding in a matched metal tool in a heated press. Its cure temperature is around 132-160°C at pressures of 6.9-10.3MPa, and cure time ranges from three to five minutes. Lamborghini says that the material enables dramatic reductions in production cycles and the manufacture of parts with complex three-dimensional geometries that are not typically feasible with continuous fibre-reinforced laminates.

Using Forged Composite, the company reduced the weight of the Sesto Elemento’s suspension control arms by approximately 27% in comparison with the aluminium versions found on the 2010 Lamborghini Gallardo LP570-4 Superleggera. Moreover, these parts took only six minutes to produce.

Since the development of the Sesto Elemento, Forged Composite has been used to produce the two-piece seats of the Aventador J roadster and also in the engine bay of the new Huracán. However, the chassis of the Huracán is a mixed-material structure shared with its Volkswagen stablemate, the Audi R8. The R8 Audi Space Frame (ASF) is an aluminium and CFRP structure weighing just 200kg – 10kg less than its predecessor.

While the front and rear body modules of the ASF are built exclusively of aluminium, CFRP is used for the rear wall, the centre tunnel and the three-part B-pillars. These large components, which are produced using an RTM process, form the backbone of the ASF and account for a 13% share of the structure.

In the crossmember of the rear wall, where high strength in a transverse direction is required, the fibre layers of the CFRP are largely aligned unidirectionally. Up to 14 of them are placed on top of one another to form a 5mm-thick sheet with a tensile strength of 3.95GPa. In the B-pillar reinforcements, the fibre layers are aligned in all directions to support both longitudinal and transverse loads. The tensile strength of these parts is 0.9GPa.

The similarity between this approach and the one taken by BMW with the 7 Series is striking.

More mainstream applications
Indeed, it looks like Audi will also be introducing CFRP parts into its more mainstream vehicles. In June this year, Audi's long-term CFRP research partner, Voith, announced that it had received an order from the German carmaker for the high-volume manufacture of a CFRP component for one of its future models.

"The carbon-fibre wheels [on the Shelby GT350R Mustang] reduce vehicle weight by 60 pounds compared with aluminium, yet are stiffer for better steering response" – Adam Wirth, Ford

Recently, CFRP has been used to produce structural components for a vehicle significantly cheaper than either the Huracán or the R8. With a price of around £45,000 ($69,500), Alpha Romeo has dubbed its 4C the 'affordable supercar'. Launched in late 2013, the 4C is produced at the Maserati plant in Modena, Italy. It is capable of accelerating from 0-100km/h in just 4.5s and reaching a top speed of 258km/h.

This performance is achieved by ensuring that the car has a weight-to-power ratio of less than 4kg per horsepower; the designers of the 4C chose to reduce its weight rather than increasing its horsepower. The car weighs just 895kg, and features extensive aluminium, low-density sheet-moulding compound (SMC) and CFRP.

Single-piece construction
The 4C boasts a CFRP monocoque produced using similar processes to that used for the £1m LaFerrari. The one-piece monocoque weighs 65kg and is manufactured by the Adler Group of Naples. To produce it, E700 series carbon-fibre prepreg from TenCate Advanced Composites are laid up by hand, vacuum-bagged and then cured in an autoclave.

Using this process, Adler is able to produce components that would normally require several pieces and multiple production steps in a single phase. A conventional steel door pillar, for example, would usually be made from around six different pieces; in the 4C, the door pillar is part of the monocoque. The complexity and expense of fabricating this monocoque could only be justified by the low production volumes involved; a maximum of 3,500 4Cs will be produced each year. 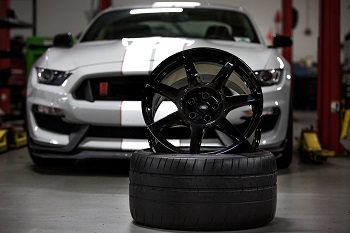 The Shelby GT350R carbon-fibre wheel uses a flexible polymer mould element and is lighter than aluminium versions
The use of CFRP does not have to be limited to the body-in-white and panel work of a vehicle. Ford claims to be the first carmaker to be mass-producing CFRP wheels.

These wheels – which are almost 50% lighter than aluminium alternatives – will feature on Ford’s Shelby GT350R Mustang, and will be fitted as standard equipment. They have been developed in partnership with Australian company Carbon Revolution.

Carbon Revolution has developed a vacuum resin infusion technique that enables it to avoid the use of prepregs, which need to be shipped and stored at low (near freezing) temperatures, have a limited shelf life after formation, are expensive, have difficulty conforming to complex geometries and – as we have seen – need to be moulded and cured under high pressures.

Flexible polymer
The company's method employs a flexible polymer mould element. This flexible element can mould undercut areas and cavities that conventional rigid moulds cannot. Furthermore, the flexible polymer mould is cheaper to produce than its rigid counterparts and allows for the other tooling components to be manufactured to lower tolerances. In comparison, matched solid moulds must be machined to high tolerances to obtain the correct fit with the adjoining mould components.

Adam Wirth, chassis Supervisor at Ford Performance, says: “The carbon-fibre wheels reduce vehicle weight by 60 pounds [27kg] compared with aluminium, yet are stiffer for better steering response." According to Ford, by reducing unsprung weight (those components not supported by the suspension), the lightweight wheels can have a significant impact on the handling and performance of the Shelby. Lowering the weight of the wheels reduces their rotational inertia by almost 40%, which helps the vehicle start, stop and turn faster – improving its response time to driver input. In addition, the lighter wheels reduce the workload of the suspension components – the springs and MagneRide dampers – as they keep the tyres in contact with the road over undulating or broken surfaces. 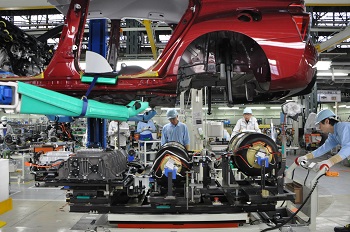 The CFTRP stackframe on the Toyota Mirai is produced in the assembly area of the Motomachi plant, Japan
The hydrogen-powered Toyota Mirai is claimed to be the first mass-produced vehicle to feature a carbon-fibre reinforced thermoplastic (CFRTP) structural component. The CFRTP stackframe is the undercover of the Mirai's fuel-cell stack and forms part of the floor of the vehicle, protecting it from impacts.

Speaking at the Automotive Composites Circle at this year's JEC Show in Paris, the general manager of the project, Nobuya Kawamura, said: "The floor of the Mirai is quite complicated. Frankly, at the beginning, I thought that this was the best target for a composite application due to the complexity of the shape and the better mouldability of the material, but this is not that part we looked into."

The stackframe comprises three compression-moulded CFRTP panels made from a polyamide (PA) 610 reinforced with long carbon fibres at a 40% volume fraction, which is supplied by Toray. These panels are arranged in a sandwich structure and held together with a steel framework, which is used to fix the stackframe to the body of the vehicle from underneath. It weighs approximately 11kg less than an equivalent steel structure. The stackframe is produced at the assembly area of Toyota’s Motomachi Plant, Japan, formerly the LFA Works, where Lexus’ supercar of the same name was made.