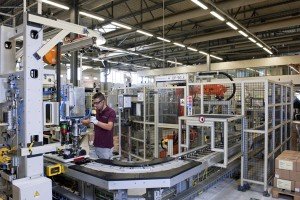 As powertrain options proliferate, automotive OEMs are adopting a flexible approach to the assembly process

There is little doubt that powertrain assembly is bearing the brunt of the global drive to increase fuel efficiency and reduce emissions. Automotive OEMs are devoting huge resources to developing more efficient powertrains and these are being delivered to the market at an unprecedented rate.

According to Comau, the powertrain assembly machine builder, there is some variety in powertrain assembly requirements around the world. “Depending on which region we are operating in, the manufacturers take a different approach,” says Ugo Ghirardi, powertrain assembly and test product line director at Comau. “In all the low-cost countries, the demand for manual stations is increasing, but also countries like China are now looking for a higher level of automation due to the higher quality standards.”

Comau has worked on a variety of projects: cylinder head assembly at GM, engine assembly at Chrysler and transmission assembly at Daimler and GM, but each customer has a different focus and Comau is increasingly looking to advanced 3D and animation to assist its activities. “We are working more and more to have the line ready for engineering at the end of the proposal phase, working with 3D models that are immediately available for ergonomic check, efficiency evaluation and reliability,” says Ghirardi.

Flexibility has been a key theme within the automotive industry for many years and this has now reached powertrain assembly. Like final assembly previously, the emphasis is shifting from day-long runs to batches of ten or even smaller. “The biggest thing is the vast amount of different models and configurations that are being built,” explains Todd Montpass, who leads Rockwell Automation’s automotive division. “If you look at all the emission control standards and the drive in North America to increase fuel efficiency to get to 54.5 miles per gallon, this is driving huge investment in the product design of the powertrains.”

He continues: “What we are seeing in the assembly process is a lot more product being built on the same lines.” This is necessitating greater adaptability. “We see the lines being laid out much more flexibly so that you can load-balance the line,” Montpass states. “So if you need to insert another subassembly process you can either add a station right next to it or you can move the work of the people, redistribute the workload to different stations along the lane to keep the balance and flow.” This needs to be achieved quickly so as not to take a line down for several weeks.

Another strategy is to use more kitting systems. “The parts will be kitted up in the warehouse or stocking area and delivered to the line where they are needed because you don’t have the room and space line-side to be able to do that,” says Montpass. “That is one big trend that we are seeing across the industry, but particularly in powertrain assembly.”

Looking to labour
Earlier this year it became apparent that Chrysler would struggle to meet the growing demand for its new four-cylinder Tigershark engine just using the lines at its Dundee plant, so the OEM decided to add a line at Trenton North. But unlike the highly automated line in Dundee, much of the work on the new line is being done by hand.

According to Brian Harlow, Chrysler’s head of North American powertrain manufacturing, the line needed to be ready in “three to four months, which in our business is unheard of”. Opting for a less automated line enabled it to become operational much faster than would otherwise have been possible. [sam_ad id=17 codes='true']

The new line also cost less and will be easier to reconfigure as the company’s needs change. “We know we have other engine improvements to make to meet the CAFE and emission requirements that are coming,” says Harlow. “We’ve found over the course of time that our return on investment for some of this automation is very low because we turn around and change it to accommodate something that may not even be that major.”

World Class Manufacturing at Chrysler
The more labour-intensive approach to engine assembly has been made possible by the World Class Manufacturing (WCM) system, credited with improving Chrysler’s quality and productivity. “It has completely changed our behaviour and what it means to build something,” says Harlow. “Although we’re certainly adding labour content to making the engines, we’re also doing it in a way that is much more efficient than we would have in the past.”

The vehicle manufacturer also worked with Strategic Manufacturing Solutions (SMS), based near the Chrysler Tech Centre in Auburn Hills. “What we have done is bring 3D into our upfront processes, in effect injecting the principles of WCM from the very beginning of our planning for production start-ups such as the ones in Kokomo. SMS has generated a three-dimensional modelling system specifically for powertrain manufacturing that it calls ‘CREATE3D’.”
The system enables issues that may delay a programme, or cost money to fix, to be addressed even before the first piece of equipment arrives at the plant. Three-dimensional layouts are used to help decide where racks and materials should be stationed to bring parts to operators in the ‘Golden Zone’, a 60-degree window that is ideal for component presentation. They can also be used to optimise working conditions for operators.

In addition, the software has the ability to display an exploded view of a machine. This enables an operator to see all the nuts and bolts, which makes maintenance and repair much easier. One of the other benefits is the immediate information exchange between different plants, machine tool builders and SMS. Using a computerised white board, changes to layouts can be made and communicated through a remote access system to sites across the world.

Smartening up cells
GM’s Tonawanda engine plant in Buffalo, New York is an old facility, but the site of some of the company’s most advanced manufacturing techniques, and after a $400m investment it will start producing four versions of the Gen 5 Small Block: a 4.3L V-6, a 5.3L V-8 and two variants of a 6.2L V-8. At full production, the plant will produce more than 1,000 engines per day.

“We have invested 40,000 hours and $1.8m in training the workforce to build these engines with uncompromising quality, and we’ve added some of the most flexible equipment ever used in the industry to make sure we can meet market demand,” says Steve Finch, plant manager.

For the Gen 5 Small Block, Tonawanda is the first GM plant to use an automated cylinder head assembly Smart Cell that consolidates the work of four machines in one.

Built by Comau with Siemens controls, the Smart Cell helps to align capacity to market demand while providing production and product flexibility. Compared with a traditional assembly line, the Smart Cell cuts fixed and variable costs by 40%, reduces floor space by 60% and brings down the number of automation components by 75%.

The Smart Cell uses an automated pallet-positioning system and two mobile robotic arms equipped with changeable tools stored on a compact tooling plate or shoe box. One tooling arm is always working, while the other is reconfiguring for the next step in the sequence; production is continuous and uninterrupted. The pallet positioning system also allows for flexibility to manipulate the head for product variants.

Each of Tonawanda’s three Smart Cells installs 48 parts into the cylinder head in 40 seconds, not counting the time it takes for the gantry to place the head into the machine and to later remove the head. Collectively, Tonawanda’s Smart Cells deliver a completed head every 21.7 seconds on average.

Rapid tool change time is enabled by radio frequency identification (RFID) integrated with an IO-Link coupler and new pneumatic cylinder position sensors in place of a traditional mechanical pin-based connection system.
This system enables the robotic arms to select and install tools from the tooling plates on the fly. Tooling may be added to accommodate product changes or new product variants, with no interruption to production and at a much lower cost. At the end of a product’s life cycle, Smart Cells can be easily repurposed for other growing products with simple tool changes.

Looking at powertrain assembly as a whole, it is clear that as more powertrain options are introduced in response to fuel efficiency and emissions requirements, OEMs are not adopting a blanket policy of greater automation, but instead selecting much smarter solutions.

Overall, levels of automation are actually decreasing as OEMs and tier one suppliers demand greater flexibility and modularity.