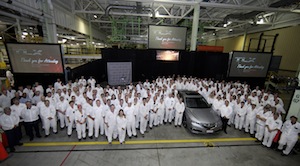 US – The mass-production launch for the TLX in Ohio means that over 90% of Acura vehicles sold in America will now be made within the region; first deliveries of the luxury sedan will occur in August.

The 2015 TLX was designed, developed and engineered by R&D teams in Ohio and Los Angeles and will be manufactured exclusively in the former. Its maker describes the model as “a technological powerhouse”, featuring two new advanced powertrains and two next-generation precision-handling technologies – Precision All-Wheel Steer (P-AWS) and Super Handling All-Wheel Drive (SH-AWD).

The two direct-injection engines – a 206hp, 2.4-litre DOHC inline four-cylinder and a 290hp, 3.5-litre SOHC V-6 – are both produced locally at the Anna plant. The Marysville facility has implemented innovations including a new roll hemming technology, enabling greater styling sophistication, and sound-deadening materials that help to reduce noise within the TLX interior.

“The start of mass production of the TLX marks a new era for our Acura sedan line-up,” remarked Mike Accavitti, senior vice-president and general manager of Acura. “The TLX is built in a world-class facility with a world-class workforce.”