Lightweighting is driving continuous improvement in all materials, but especially steel 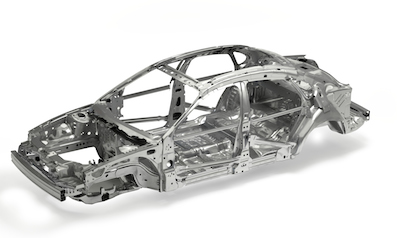 Lighter weight equals less power equals lower carbon emissions. The equation is simple and the quest to find ever-lighter materials for use in automotive production is unending. Aluminium is a lot lighter, plastics are both lighter and easier to form and carbon fibre is much stronger, weight for weight – but steel still has a lot going for it. One of those advantages is undeniable.

“Between steel, aluminium, carbon fibre and plastics, it is a cost question,” says Kenneth Olsson, an automotive business development specialist with Sweden’s SSAB steel company. “Aluminium is about twice the price of steel; plastics can be ten times.” Carbon fibre varies depending on what materials are being used but it is certainly very expensive and, for the moment, remains the preserve of cars like the McLaren P1 and some components of other premium vehicles.

Carbon fibre is incredibly strong for its weight but its resistance and rigidity is also its disadvantage: it does not absorb energy in a collision, or at least not to the same extent as metals. What it does is resist to the last nanosecond and then fail catastrophically, going from complete integrity to shattering into pieces with no intervening distortion, crumpling or bending. Even McLaren doesn’t make the entire car from carbon fibre; the safety cell at its heart is constructed from it but is surrounded by aluminium components, which will deform and absorb energy in a crash.

So, while exotic materials like carbon fibre have an advantage when it comes to reducing weight, metals still have the edge in the real world of road accidents; aluminium and steel are better at protecting occupants from the effects of sudden deceleration than newer materials. Surely, if that is the case, the balance swings towards aluminium, which combines lighter weight with good energy absorption? The answer, as a metallurgist would point out, is ‘no’. Or perhaps, ‘not yet’.

Sticking with what you know
There are a number of reasons to prefer steel to aluminium in many settings. Its manufacturing infrastructure is firmly established and the processes are well known, both of which lead to cheaper production costs. It is easier to join – aluminium has a tendency to ‘puddle’ when subjected to conventional welding – and since a lot of money has been spent on current joining processes and infrastructure, high-volume manufacturers are in no rush to invest in replacements. Jaguar Land Rover may have embraced aluminium with enthusiasm, but it can charge premium prices; other companies have to take a more balanced approach.

Even in weight-sensitive applications, steel still has its part to play. BMW has found that reductions in CO2 of 10-15 g/km can be achieved for each 100kg of weight saved, and while the trend has been towards more luxurious cars equipped with more features and gadjets – all of which add weight – the deployment of high-strength (HS) steels has achieved weight reductions of 20%.

"The new Mercedes S-Class has an intelligent mix of materials, with 49% steel. They use high-strength (HS) steels for the beams and body reinforcements, positioned to absorb the forces generated by crashes" - Kenneth Olsson, SSAB Some steel manufacturers are already talking about a possible further 20% saving in addition. There is a cost: ultra-high-strength steels (UHSS) are around €200 per tonne more expensive than conventional steel grades. On the other hand, they are much stronger, pound for pound. Realistically then, the choice spreads across all normal metals: aluminium, conventional steel or UHSS. [sam_ad id=17 codes='true']

“The new Mercedes S-Class has an intelligent mix of materials, with 49% steel,” says Olsson. “They use high-strength (HS) steels for the beams and body reinforcements, positioned to absorb the forces generated by crashes.” He concedes that, if aluminium were the same price as steel, more cars would be made of it, although the issue with joining would remain. “You can save money on items produced as castings – engine blocks, for example, are not designed for energy absorption. But beams within cars tend to be UHSS.” Even where aluminium and UHSS have the same or similar performance for their weight, UHSS retains a cost advantage. 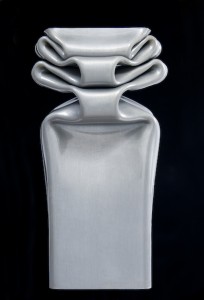 “UHSS has always been quite cost-effective,” Olsson continues. “It is more expensive per kilogramme than milder steel but less material has to be used for the same physical performance. There is only a small cost penalty in going to UHSS.”

On good form
There are issues with the formability of UHSS, but these are on the way to being overcome. Hot forming, for example, is becoming more popular. It is more expensive than cold forming but it does open up more opportunities in design and construction. The process involves stamping the metal while it is in a heated state, then cooling it in the press.

Hot stamping enables UHSS to be used in safety-critical applications such as pillars, roof rails, door beams and bumpers. SSAB’s testing on its Docol Bor range of Boron steels has found no difference in the chemical composition, yield strength or tensile strength of hot versus cold-rolled steel, after heat treatment.

The processes used in manufacturing with the current generation of UHSS rely on advanced gases, developed by companies like Linde Group. The precision of laser cutting relies on pure oxygen and nitrogen. Arc welding of carbon and stainless steels, as well as laser welding, require special gases ranging from argon-based shielding gases to tailor-made laser process gases, which help to improve welding speed and quality. Non-abrasive CO2 snow is a more environmentally-friendly way of removing surface contaminants prior to welding than older methods; it is very effective at removing fume residue.

Heating makes stamping easier because ductility is increased and flow stress is consequently reduced. In furnace heating, sheets are heated, then stamped and held at the bottom dead centre for the die quenching, before the parts are punched and trimmed. As well as improved formability, the study found that tensile strength of formed parts after die quenching stood at 1.5GPa. Disadvantages included: scaling, which had to be removed by shot blasting; the expense of aluminium sheets for anti-oxidation coating; the size and price of the equipment; and the costly trimming and punching of formed parts by laser cutting.

The alternative, rapid resistance, heating process appears to have a number of advantages. The paper found that it took only two seconds to heat to 900°C and this rapidity inhibited the formation of oxide scale. The heating apparatus itself is simpler than a furnace, rapid heating can be synchronised with a press quite easily, and temperature is highly controllable. Its most significant disadvantage seems to be that it is limited to square sheets. Non-square sheets change the cross-sectional area, which leads to non-uniform temperature distribution; industrial applications are thus limited.

The last method enabled the production of comparatively small HSS parts. A rectangular sheet was resistance-heated to obtain a uniform distribution of temperature, and just after the end of heating, a sequence of forming, shearing and die quenching was performed by one shot to prevent the drop in temperature that is associated with conventional hot stamping when applied to smaller parts. The drive for improvement never stops.