A stronger simpler safer shuttle for PT and EC lines 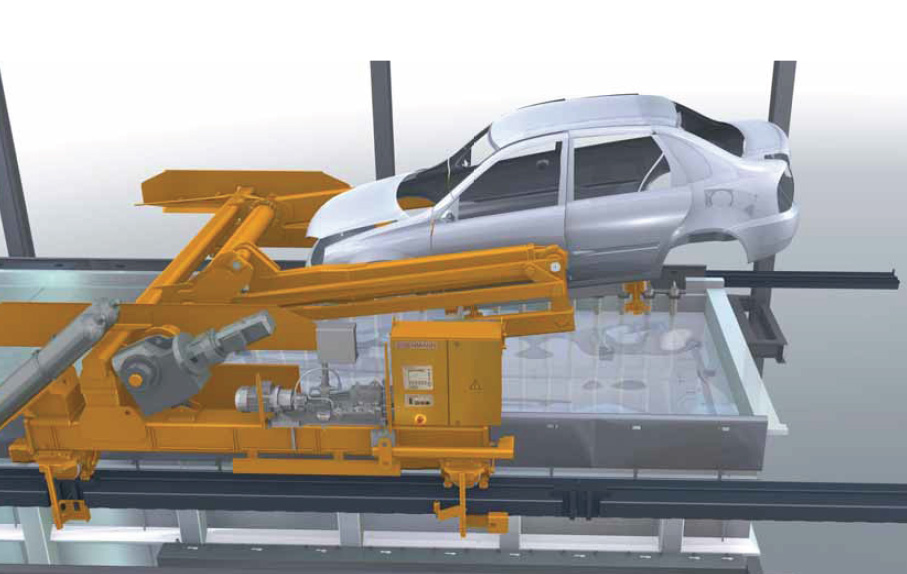 Vehicle manufacturers worldwide deploy VarioShuttle to transport auto bodies through PT and EC lines. And for good reason: the freely programmable horizontal, vertical and rotation axes and the individually controlled shuttles enable dip curves and process times to be configured quickly and easily to a wide range of body types and geometries.

In contrast to chain- and crank-type conveyor systems, this ensures very high-quality cleaning and coating. Additionally, it reduces the force applied to weaker crumple zones and bonded surfaces. However, no system is so good that it cannot be improved – not even VarioShuttle.

Based on the results of its own insights and the real-world experience of users, Eisenmann drew up a list of requirements for the redesign of VarioShuttle.

Primary goals included compatibility with existing systems, lower maintenance, greater uptime and enhanced functionality, and simple but effective solutions to emergency scenarios. In addition, it was imperative that coating quality be sustained or improved. 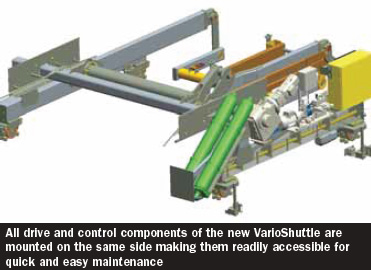 Simple design reduces maintenance
The new-generation shuttle has been significantly re-engineered, with all drive and control components now located on the master side. Particular attention has been paid to maximizing the accessibility of the various modules. Only the rollers for movement and support are located on the opposite side, along with the electric power transmission for the EC process.

The new model is also easier to maintain due to the use of open, unsealed bearing units. The easily replaceable segment bearings are designed to allow process fluids to flow through them. Caking and adhesion are prevented thanks to the use of suitable materials. This solution also avoids the need for expensive compressed air, which was used in previous models to prevent fluid from penetrating the seals.

The open design of the electric power transmission system posed a particular challenge in this seal-less model. This was overcome by employing special sintered electrodes made from carbide, which are mounted on a copper-beryllium disc and are easy to replace. The disc is attached to the vehicle body via a fixed electrically conductive shaft.

Hydraulic lift-axis drive with energy-efficient load compensation
Another innovation implemented in the new VarioShuttle is the hydraulic drive with accumulators employed on the lift axis. Its design is based on the opening mechanism of car trunks, which require minimum effort to open and close. Thanks to this drive system with load compensation, air actuators are no longer required, and the drive capacity was reduced from around 20kW, to 4kW. The drive comprises a hydraulic cylinder and a high-pressure accumulator that acts as a spring element. A second accumulator is used to store energy and compensate for peak loads.

The hydraulic fluid is a water-glycol mix whose compatibility with the EC process has been demonstrated both in-house and by a leading paint manufacturer. The hydraulic fluid is conveniently stored in the VarioShuttle’s frame; no separate tank is required. Moreover, the large surface area of the frame allows the heat produced by the system to be dissipated without an active cooling system. Deploying this hydraulic solution reduces temperatures in the control cabinet by 15 to 20ºC, improving operational reliability.

Continuously rotating axis for greater productivity
Improvements were also made to the rotation axis that previously transmitted the rotational movement via toothed belts integrated into the lifting arms. As a result, it was necessary to manually 'rewind' the shuttle once it had rotated almost 360°. In the new model, the axis is driven directly by a gear motor via an open rotating crank.

This means the axis can rotate continuously, reducing idle times. In addition, in newly built paint shops or full replacements of a VarioShuttle system, the paint shop length can be reduced or the throughput increased.

Emergency scenarios – simple solutions
In an emergency, it is essential to be able to move a malfunctioning shuttle into a position from which it can be removed from the production line while preventing damage to the bodies following. For this reason, earlier versions were equipped with redundant drives on all axes, but all VarioShuttle users agreed that this was unnecessary. In response to this feedback, an emergency solution that is quick and easy to implement has been developed for each axis. It features an electrically powered, portable hydraulic unit that can be plugged into any 230-volt socket. The rotation-axis drive allows a shuttle to be moved to a maintenance position with a standard cordless screwdriver.

An OEM vindicates version 4
The redesigned VarioShuttle deployed at a major OEM’s production facility in Germany has fulfilled all expectations. A prototype of version 4 was operated in a demanding volumeproduction setting for twelve months. During this time, none of the emergency solutions had to be implemented. Moreover, the designers’ innovative modifications have been a resounding success: a reduction in maintenance effort of around twothirds, estimated at workshops with various OEMs, has proved achievable in an application. And of course, lower maintenance translates into greater uptime.

High and heavy – no problem
With a payload of up to 1.5 metric tons, the new VarioShuttle is suitable for the PT and EC of very large and heavy vehicle bodies. Depending on the needs of the geometry and the process, throughputs of up to 70 bodies per hour can be achieved. Where version 4 is deployed in a new plant, rather than to replace one of the 560 or so VarioShuttle systems in operation at carmakers worldwide, the payload can also be significantly increased.