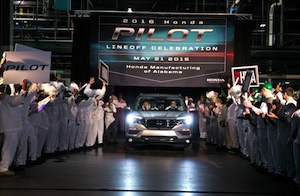 US – The vehicle is being made exclusively at Honda Manufacturing of Alabama (HMA). The eight-passenger SUV is fitted with a direct-injection i-VTEC V-6 engine.

The new Pilot joins a refreshed Honda light-truck line-up which includes the CR-V and the newly launched HR-V crossover, the gateway model in Honda’s SUV/CUV offering. The Pilot is produced alongside the Odyssey. HMA’s light-truck line-up will be expanded early next year when the new Ridgeline enters production.

In addition to the production, all three generations of the Honda Pilot have been designed and developed in America by Honda R&D Americas, at its design studio Los Angeles, California, and R&D centre in Raymond, Ohio.