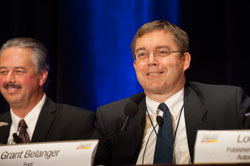 markets have led to increases in the exchange of material between continents as well as across North America. 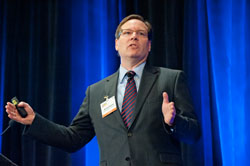 “There is no one size fits all supply chain,” said Dana McBrien, associate chief advisor for Honda of America. “In some cases we have seen parts manufacturing actually moving further away from our facilities. But we’ve also seen the US move into ‘low cost country’ position, and we’ve nearly doubled our export of vehicles and parts from here in the last 15 months. You have to find the right mix.”

Jim Barnett, vice-president of automotive business development for the Americas at Ceva Logistics, also pointed out that the changes in China were a reflection of its growth and development as a market. He predicted that the increase in wages and in consumption would drive even more logistics flows to and from the country. "When wages increase exponentially, trade flows grow exponentially," he stated.

Grant Belanger, who has recently returned to the US as executive director of global material planning, said that rising global production and increasing shifts towards global platforms and emerging markets would continue to disrupt the North American supply chain.

“We’re going to build cars, trucks and SUVs around the world and the growth in some regions is going to change the balance of your logistics channels,” he told the audience. “The customer is going to pick the winner and losers and part of being picked is having the right product at the right time.”

Growing pains and gains
The US market continues to recover volume, with sales this year expected to top 15m light vehicles and to climb back above 16m by 2015, then rising gradually for the rest of the decade. The US still faces economic risks – the conference preceded what has become at partial government shutdown over borrowing limits that could lead to a default, while unemployment remains high and there could be fallout from shifts in macro-economic policy, including rising interest rates. However, IHS expects the automotive industry to remain relatively “divorced” from such economic trends over the next two or three years thanks to replacement demand, an improved housing market and a steady stream of new launches.

“It’s not the gift that will keep on giving for five or six years, but the economy will support strong automotive growth in the coming years,” Robinet said.

The true strength of the sector is currently its rising production and profitable levels of plant capacity utilisation across most OEMs and tier suppliers. Light vehicle assembly has increased 89% from the 8.6m units produced in the trough of the economic crisis in 2009, according to figures from IHS. Production in the US, Canada and Mexico will increase 12% this year to 16.2m units, rising strongly in the coming year to more than 17.4m in 2015 and more than 18m by 2018.

Tier suppliers are already producing at or often above their production capacity, according to David Andrea, senior vice-president of industry analysis and economics at the Original Equipment Suppliers Association (OESA), which represents 330 component manufacturers and material suppliers, as well as 100 service providers, in North America. According to Andrea, the top 25% of those members are at capacity utilisation of 85%. Looking more specifically at the data gathered from its members, Andrea revealed that companies involved in forging, casting and tyre-making were at 100-105% capacity. This increase in plant utilisation for automotive suppliers is driving 24/7 production.

This output will be further strained as carmakers continue an aggressive new model launch schedule, with about 40-50 expected next year in the region. Robinet said this would lead to a “logistics snarl”.

While these are clearly not the worst problems to have, logistics issues here could nevertheless severely impact a company’s bottom line. For tier suppliers, for example, a launch can often mean half a dozen or more new parts numbers per vehicle per supplier. Combined with the overall increase in output, there is no room for supply base error, according to Andrea. He said that OESA surveys typically found that logistics wasn't normally a top concern among tier suppliers, except in times of fuel spikes or capacity constraints. However, Andrea said that the present focus on managing supply chain constraints meant that logistics was a concern all the time.

The conference also featured live streaming of the plenary sessions, which you can view here.