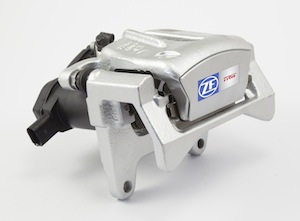 Germany – The electric park brake (EPB), motor-on-caliper technology, which was developed at TRW’s technical centre in Koblenz, is currently produced in North America and China. It is now in its fifth generation.

“ZF TRW was first to market with its EPB system in 2001, which pioneered with Lancia, Audi and VW and has since launched on Renault, Nissan and Daimler platforms, and more recently on the BMW X4 and BMW i8, Jeep Renegade, Fiat 500X, Ford F150, Honda Accord, Nissan Qashqai, Range Rover Evoque and more,” stated Manfred Meyer, vice-president, ZF TRW Braking Engineering.

He added that ZF TRW “has exciting development plans for EPB”, saying the company is “ideally positioned to further enhance the technology in line with new safety, functionality and cost targets”.

ZF TRW offers a range of EPB solutions, including standard EPB; integrated EPB that avoids the need for a separate electronic control unit, due to its integration with the electronic stability control system; and EPB for front axles, which can help to make the technology affordable for smaller vehicle segments.