Your flexible friends in machining 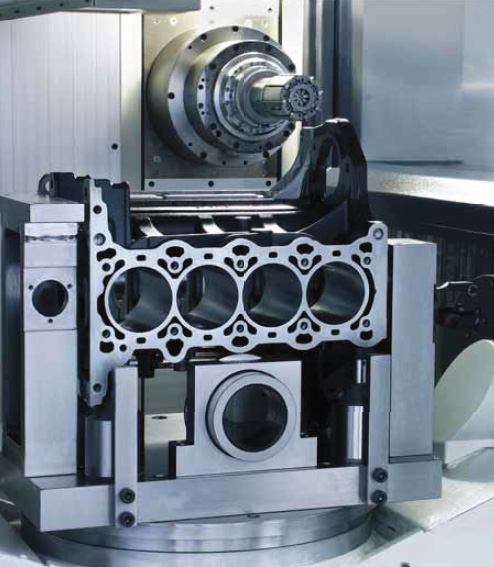 Machine tool investment for producing automotive components is seeing new vigour, as demonstrated by a stream of investment announcements over the past six months by major auto OEMS. Chrysler Group, for example, has pledged to invest $72m in its Toledo machining plant at Perrysburg, Ohio to produce new generation front-wheel and rear-wheel drive torque converters, and steering columns.

More than 100 new machines (22 different types) have been imported for the project. And at the risk of labouring the point, Toyota says it will be installing new machining lines at its auto parts manufacturing company in India (Toyota Kirloskar Auto Parts). The investment of $172 million will help produce manual transmissions for IMV2 series vehicles. So, is this surge in machine tool investment being corroborated from the suppliers’ perspective? Well, indeed it is. For instance, machine tool specialist MAG ended 2011 with backlogs that stretch to 2013 in the automotive segment. The company says it enjoyed a record increase in order intake of 90% over 2010. The results include a significant amount of business in China and India, among which were two manufacturing lines for SGM Wuling (SGMW) comprising a total of 115 CNC machines from MAG’s XS series.

It’s all in the cycle

A new Hardinge-Bridgeport XR 600 five-axis vertical machining centre at Northampton, UK-based GE Precision Engineering is being deployed for the finish-machining of crankcase assemblies for Norton 961 parallel twin motor cycle engines, this being a new engine design with push-rod valve actuation, three bearing crank and balancer shaft. GE now has the capability to complete up to 30 crankcases a week. “Five-axis capability gives us a number of new dimensions for machining the crankcases in a single operation,” explains managing director Garry Edwards. “Only a couple of very minor operations are needed on the casting before we set up the component on the Hardinge.”

The XR 600 offers a popular entry into five axis machining. The standard spindle operates at 12,000 rpm but there is a 15,000 rpm option with a belt and gearbox-free WEISS directly-coupled unit. This reduces spindle inertia and offers increased acceleration/ deceleration times.

All cylinder heads, crankcases and most crankshafts for Wuling’s Sunshine car are being produced on MAG systems. In addition to supplying three agile manufacturing systems to German facilities for Mercedes A-, B- and C-class engine production in 2011, MAG was also chosen to contribute to the brand’s globalisation into China. BBAC (Beijing Benz Automotive Corporation), a joint venture of Daimler AG with BAIC, ordered a manufacturing line from MAG for cylinder block production. Another notable project in China is with Changan Automobile, which has placed four cylinder block lines and four turnkey crankshaft systems with MAG Automotive Europe representing €160 million. In addition, Tata Cummins has been working closely with MAG globally on several production systems for mid-range heads and blocks at its Jamshedpur and Phaltan sites in India. The secret for MAG is introducing new technology features designed to match auto OEM requirements. For instance, the company has just released the new dual-spindle.

Age of the robot 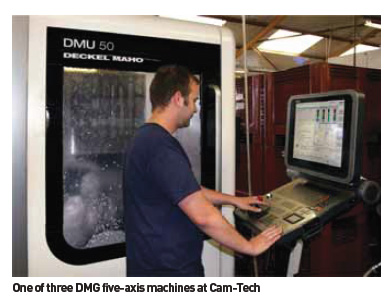 The path for many automotive manufacturers seeking maximised efficiency and minimised labour costs is via automation. But robot-tended operations are no longer the preserve of OEMs; they are now a common sight throughout the supply chain. A case in point can be seen at second tier automotive subcontractor Metal Technologies Inc, of Bloomington, Indiana. Here, investment in four Makino a81 horizontal machining centres, with two central materialhandling robots, has enabled the company to manufacture up to 510 parts per day (approximately 255 parts in each cell).

“We can feed raw materials into the cell and using a visual recognition system, the robot picks the part off the dunnage, cleans it and sends it for machining,” explains company owner Doug Conrad. “Once machined, it gets tested, washed and then restacked on the dunnage and sent out the door, all without human contact. Even more impressive is the fact that we can machine six different part numbers in the same cell. There is a lot to automation, but if you stick with it, it will pay off. In 2006, we manufactured about 60,000 parts per year – today this is more like 800,000. Automation isn’t just for the big guys anymore.”

Automation has been part of machining operations for 10-15 years in many cases and now several manufacturers are looking at second-term replacements for hard-worked robots. Among their number is Norgren, based at Lichfield, UK, which has replaced two ageing robots with a pair of Kawasaki RS06Ls to allow faster cell tool change times when machining brass fittings on a rotary transfer machine. “As expected, after 13 years’ hard labour there have been some joint wear issues with the original Kawasaki robots,” explains Mark Clark, manufacturing engineer at Norgren. “Although Kawasaki recently gave the robots a clean bill of health for another year, ongoing investment by Norgren in the automotive section made this a good replacement opportunity to upgrade and remove risks of obsolescence.” The automated machining cells are programmed to produce up to 100 variants of fitting produced in batches. Brass stampings enter the cell, randomly positioned on a conveyor belt. A vision camera over the conveyor belt pickup point, illuminated by a structured light source, provides the robot with co-ordinates to pick the component correctly. The robot has a double gripper and moves to the transfer machine load point, removes a finished machined fitting and loads the un-machined fitting. The machining cycle is complete in six seconds.

The key to successful automated machining for many is simplifying and improving the communications interface between machine tool and robot. With this thought in mind, Kuka Roboter and Siemens Drive Technologies recently unveiled an application for the integration of the former’s robot technology into the latter’s interface for operator control and programming—without major effort.

In other words, no particular previous knowledge of robot programming is required: the PLC programming tools with STEP 7 from Siemens can be used to create the entire robot program and prepare it to such an extent that it can be completed within the Sinumerik NC cycle programming. Execution of the machine tool and robot programs can then be controlled and monitored in parallel channels in the Sinumerik Operate user interface.

High five
Aside from automation, arguably the other biggest trend in machining automotive components is five-axis technology. Demonstrating how this machining centre capability can pay dividends is Coventry, UK sub-contractor Cam-Tech Engineering, which has installed three five-axis machining centres from DMG to produce brake and clutch components for luxury and high performance cars.

Cam-Tech produces around 4,000 brake calipers per month on the DMG machines, mainly from free-issue aluminium castings but also from solid billets in the case of prototypes and smaller batch quantities. Many high-end marques are supplied, including Porsche, Subaru, McLaren, Aston Martin, Ferrari, Bentley, Bugatti and Lotus. The first five-axis machine, a DMU50, was installed after one customer agreed to transfer caliper work from another subcontract machinist. At a stroke, it increased Cam-Tech’s turnover by 20%.

Northern Tool and Gear Company (NTG), one of the UK’s largest familyowned precision gear subcontractors, has invested more than £2 million in new equipment over the past few years to improve its capability. As part of its recent investment, the company has installed a Jones & Shipman Ultragrind 1000 CNC cylindrical grinding machine. Process improvement was a key factor in the decision, as managing director Gordon Strachan’s company was about to renegotiate a threeyear automotive contract for a new generation of seven components for a transfer gearbox assembly. The existing gearbox had been taken from prototype development with the customer into serial production by NTG and, to demonstrate the success of the project he says: “Over 3,500 sets have been supplied, plus spares, and not one had been rejected. We have also seen around a 15% improvement in cycle time.” With 90% of production through the machine based on hardened and tempered EN36, NTG has developed a universal wheel specification of 500 x 100mm and uses single-point dressing, which is “easy and straightforward to program”, again shortening changeovers. Staying with wheel technology, Tyrolit has launched a range of vitrified CBN wheels that have a reinforced carbon fibre core for external cylindrical grinding of automotive components such as camshafts, crankshafts and gear shafts in large volumes. Genis CF weighs one fifth of a conventional steel-cored grinding wheel.

In one Genis CF test when grinding a 48-52HRc cast iron camshaft at 100m/s on a Landis 3L machine, the interval between wheel dressing was doubled from 800 to 1,600 components, leading to a 14% increase in throughput.

“A 3+2-axis machine was the optimum choice for prismatic machining of the calipers, but most machining centres on the market of this configuration were 3-axis models with a bolt-on trunnion/table,” says company founder John Bolger. “In fact, the DMG machine was the only one we could identify as being a purpose-built 3+2- axis type with an integrated rotary axis. This configuration gives an added advantage in that the Z-axis travel is not compromised, whereas it is curtailed if a compound rotary table is added to the fixed bed of a three-axis machining centre.”

The installation was so successful that Cam-Tech returned to DMG for its next two five-axis machines as caliper volumes continued to grow: another 3+2-axis model and a DMU50 eVo Linear. Of course, many subcontractors with five-axis machine tools do well serving the motorsport sector, where such technology serves highly complex, high value, yet low volume component machining. However, some are finding potential cross-over with luxury and supercar automotive markets. Trying to explain, Martin Keswick, managing director of Capricorn Automotive, chooses his words carefully.

“Motorsport, and Formula One in particular, is still a very important part of our business, I wouldn’t want anyone to think otherwise,” he says. “But, let’s face it, regulation changes such as those in Formula One have reduced the number of engines used and the number of parts we can supply. IRL (Indy Racing League) is another example, which in 2012 has changed engine configuration from V8 to V6, that’s a 25% reduction in volume right there.”

Capricorn Group, which includes facilities in France, Germany and Italy as well as the UK, has consequently made a strategic decision to target niche automotive sectors that tend not to interest the big players. “Formula One may only want 600 pieces a year, whereas our road car customers want anywhere between 5,000 and 30,000,” says Keswick. “We are working on cylinder liners to a typical 10 micron cylindricity tolerance, so what we are looking for is good metal removal rates combined with good dimensional and geometric control.”