Wind of change blows in some surprising places

The most visible form alternative energy generation is the wind turbine. It has been accepted across the world, although not without opposition – especially from those whose views would be spoiled by the planting of wind farms. But the questions on which the whole debate turns are: do they work? Do they offer genuine commercial benefit?

There’s a lingering suspicion that green may look good but is expensive, and the only way to get companies to invest in windmills is by contributing large amounts of public money, either directly or by tax incentives. However, those that do make the effort, even against percieved wisdom or worries, can find themselves blown in a surprising direction.

The Energy Savings Trust (EST) in the UK identified the Orkney Islands as the best place to have an onshore wind turbine – and Dagenham, Essex, south-east England as the worst. The EST’s study took two years, studied 57 locations, from the northern isles to south-west England, but its assessment did not stop Ford from building a wind farm at its Dagenham Diesel Centre; its three turbines are clearly visible from the nearby A13 highway and also from the London Eye, in the centre of the city. 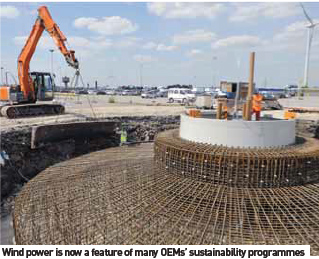 Foolish or far-sighted
In 2011, Ford announced it would be installing a third wind turbine at the Dagenham site, which used to house one of the largest integrated foundries, casting, fabrication and assembly sites in Europe and now hosts the company’s centre of excellence for diesel engine production. Groundwork was begun in May, construction, installation took just a matter of weeks and the latest turbine was ready to feed power into the plant in September the same year, in time for the autumn storms to help cut CO2 emissions at the site by 5,000 tonnes a year. The third turbine actually doubled the CO2 saving and boosted total power output from 6.7 million kWh to nearly 12 million.

The blades start turning
The collaboration between Ford and Ecotricity started in 2004 and the plant has been pretty much entirely windpowered since then. There was more than a note of selfcongratulation when the blades started turning.

“Together with Ford, Ecotricity pioneered the use of wind to power the Dagenham Diesel Centre,” Ecotricity founder Dale Vince said. “It’s great to see a company like Ford taking the lead in this way, powering their modern diesel engine centre with green energy from our windmills.” It is something of a double-whammy: wind power is generating power for the production of the most fuelefficient and lowest CO2 engines in the Ford range. 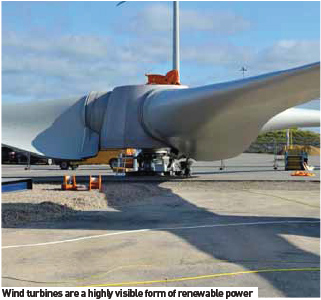 VW dives in
While Ford may operate the largest wind-powered manufacturing plant visible from London, it is not the only large auto company investing in the technology. To the east of Dagenham, out in the North Sea, are two wind farms that are part of a €1 billion investment by Volkswagen. The German company has publicly stated its ambition to pass Toyota and GM to become the world’s largest auto manufacturer. This investment achieves two objectives: it helps the company improve its energy stability, and it gives a boost to the German wind energy sector, which has been described as “fitful”. It also helps to boost VW’s corporate social responsibility rating; whether by enough to totally offset the impact of the Porsche range has not been made clear.

Another interesting development is on the supply side. Siemens AG has sold its solar energy business, citing low growth, low profits and high costs. The sale is part of a strategy to reorganise the company’s positioning in renewable energy. It is even ending its involvement in DESERTEC, a huge joint venture project to build a network of solar farms in the Sahara desert. The company will continue to manufacture components for the solar industry, including genrators, steam turbines, control systems and grid technology. But its plan now is to push further into wind and hydro; two technologies that have proven to be more profitable for it.

Renewable and alternative power sources come in many different guises:
• Biomass is not, strictly speaking, carbon-free but a biomass source can be carbon-neutral over a multi-year period. It will produce as much power as any smallto- medium power station and is suitable for industrial applications
• Solar pv (photovoltaic) – generates electricity through the action of sunlight. Toyota is installing a record-sized solar pv array at its plant in Burnaston, Derbyshire, while Renault is constructing the world’s largest combined rooftop array at facilities across France
• Wind power – Companies like Nissan in Sunderland and Ford at Dagenham, have made effective use of on-site windgenerated electricity as part of an integrated power solution.

Success in Sunderland
Siemens move – and the rationale behind it – will probably be of interest to Nissan, whose plant in Sunderland is not only consistently the most productive in Europe; it has also been a leader in the exploitation of wind power. It started in 2005 with a £2 million project for six wind turbines supplying 5% of its energy needs, which helped to cut the factory’s CO2 emissions by 10,000 tonnes. Its 4MW output also saved around £800,000 in electricity bills at 2005 prices, so the ROI was pretty spectacular; the savings have magnified since then, and the wind farm has grown as well. It went to eight and now 10, contributing a similar percentage of its overall energy needs.

Nissan Sunderland gained ISO14001 accreditation in 1998 and was the first of the manufacturer’s sites to embrace wind energy – but its success means it is unlikely to be the last. But it is also worth noting that the wind farm does not stand alone in Nissan’s efforts to cut waste.

“We target each year to improve waste recycling and to lessen the amount sent to landfill, particularly,” a spokesman said. “We’re recycling machine coolants, sand used in the casting process and water from the paintshops.” In line with pretty much all auto manufacturers, Nissan is driving to reduce CO2 emissions from its products and activities around the world, as well as cutting other exhaust emissions and accelerating recycling efforts.

With the cost of waste to landfill going only one way and the prospect of a carbon trading market finally becoming a reality, renewable energy is not just something that looks good on the CSR pages in the annual report; it makes commercial sense as well.