When carbon counts for the better 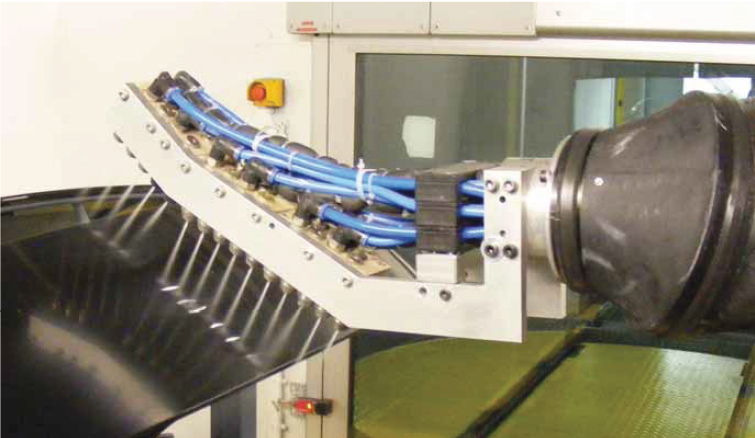 As part of its drive towards greener paintshop processes, BMW has introduced a revolutionary cleaning technology at its Landshut plant

Traditionally, plastic components for automobiles are cleaned by a powerwasher using a wet chemical process before they are painted. However, since the beginning of 2009, a dry-cleaning CO2 snow jet system is being used at the BMW works in Landshut to ensure the required degree of cleanliness before primer is applied. The change has not only resulted in improved cost effectiveness, sustainability and higher quality but also in more design freedom. Sufficient reasons for the BMW Group to integrate the efficient dry cleaning process into a topcoat line.

The BMW Group is always on the lookout for concepts
contributing towards more economical, environmentallyfriendly and resource-friendly coating processes. As a result, the Bavarian automobile manufacturer was one of the first to introduce a water-based paint system for primerless painting in series production, thus reducing both VOC emissions and energy consumption. The company is now continuing this green strategy in the Landshut plant, in its process for cleaning plastic bodyshell parts prior to painting. Plastic exterior components such as fenders, side and rear panels and rear spoilers are all manufactured for the BMW 3 and BMW 7 series at Landshut.

An alternative to wet-chemical cleaning
“We were looking for an alternative to the powerwash system for several reasons. Firstly, cost-effectiveness played an important role. Secondly, we wanted to move away from wet chemical cleaning in order to reduce energy and water consumption as well as the amount of waste water we were generating. Finally, we also wanted to improve component quality”, explained Markus Reimann, manager of the project for the development and introduction of the snow-cleaning process at Landshut. In other words, only a dry-cleaning process capable of ensuring cleaning results at least as good if not better than a powerwasher was considered. Other requirements included high reliability and availability as well as low maintenance and repair costs. During their research, Markus Reimann and his project team heard about CO2 snow jet cleaning and got in touch with several manufacturers, one of which was acp – advanced clean production.

Process technology – the decisive criterion
First of all, the systems made by the various manufacturers were closely examined to assess their suitability for cleaning the range of components produced by the BMW Group. “As we have to access extremely delicate cavities in order to clean them, we need an appropriately small cleaning head“, said Reimann. Only the system manufactured by acp fulfilled this criterion, making it the system of choice. 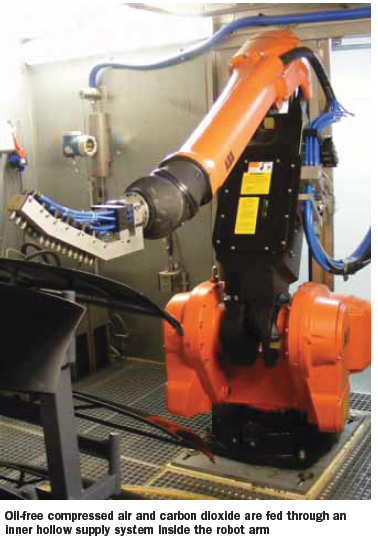 Its compact construction is due to the patented acp cleaning head, designed with a supersonic two-component nozzle. This also gives it several advantages: liquid carbon dioxide expands on exiting the nozzle to form a mixture of snow and gas, forming the core jet. Compressed air is then added as a jacketed jet to accelerate the snow crystals to supersonic speed. Compared with single-component nozzle systems, the use of compressed air to accelerate the jet significantly increases cleaning performance and also reduces carbon dioxide consumption. The carbon dioxide required by the cleaning system is obtained from processes used in the manufacture of fertilizers and is therefore environmentally neutral.

Comprehensive testing validates cleaning results
After selecting the system, the BMW Group carried out extensive tests in collaboration with acp at the Fraunhofer Institute for Manufacturing Engineering and Automation (IPA) at the Department of Coating Technology. First, tests were performed to verify that plastic components could be cleaned with carbon dioxide. Then matrix tests were carried out to evaluate how well contaminants such as separating agents, diesel exhaust particulates, various oils, fingerprints and dust could be removed.

CO2 snow is harmless and non-combustible and uses a combination of mechanical, chemical and thermal properties to remove particulate and filmy contamination in a drycleaning process without leaving any residues. On impacting on the surface to be cleaned, the snow crystals turn to liquid and then ‘sublime’. The resulting sublimation impulse causes any particulate contamination present to be dissolved and removed. In its liquid state, environmentally-neutral carbon dioxide functions as a solvent and removes filmy layers or contamination. Also, the low degree of hardness of the acp system’s tiny snow crystals ensures that surfaces are not damaged during treatment. A third requirement was to develop an optimized system configuration in order to fulfill the demands of the BMW works in Landshut.

Robot system with three nozzle arrays
To align the process with the range of parts to be cleaned, a robot system with three nozzle arrays, each containing five cleaning nozzles was designed. Depending on the component to be cleaned, the arrays are turned on and off individually via the robot controls, making the system particularly economical to operate. Oil-free compressed air and liquid carbon dioxide stored in tanks are fed to the arrays via an inner hollow supply system located inside the robot arm.

The cleaning system was first integrated into a cabinet (approx. the size of a painting booth) and placed in the primer line between the powerwasher and flame treatment booth. Because test results needed to be confirmed for mass production operation, the powerwasher and CO2 snow jet cleaning system ran parallel for a while. “As the parts are made of different plastic materials and have varying geometries, we verified the CO2 cleaning process for each workpiece individually by performing particle measurements, optical comparisons and analyses to detect surface residues, and also carried out technological tests to assess paint adhesion and optical appearance”, said Reimann. The plastic bodyshell department of the BMW works in Landshut also used the time the systems were running in parallel to develop componentspecific cleaning programs for implementation in the robot controls. 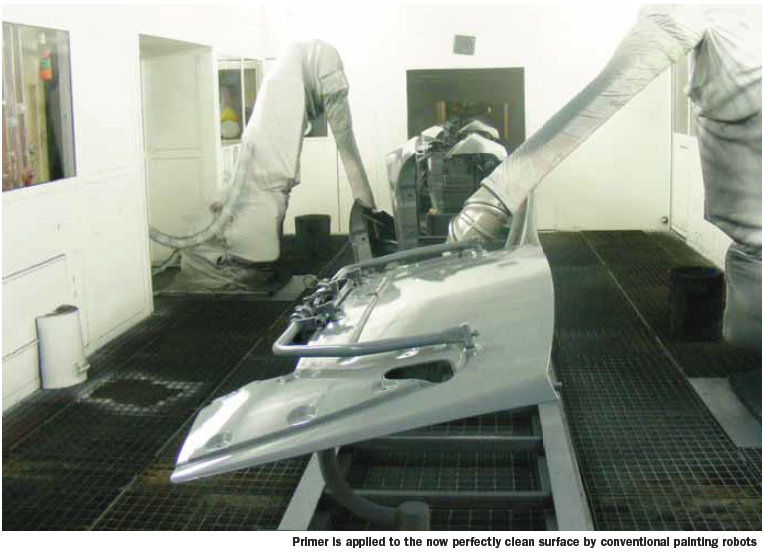 Smooth operation with many advantages
The CO2 cleaning system was integrated into the primer line running in two-shift operation at the beginning of 2009. Several thousand components are coated there every day. The painting skids, which are mounted on a turntable, are filled at the loading/unloading station. Fenders make up a large proportion of the range of parts requiring cleaning and several of these can be placed on the front and reverse sections of a product carrier. Once inside the cleaning cubicle, the robot first cleans the front fenders using the program specifically developed for such parts; then the skid is rotated automatically in order for the fenders located on the reverse to be cleaned. It takes less than two minutes to carry out a cleaning cycle on all components on a product carrier. In a subsequent step, component surfaces are activated in the flame treatment booth and then further processed in the primer booth. After drying, the transport system advances the skids to the take-off station. “With the CO2 system developed by acp, we are able to achieve good cleaning results with much lower investment and operation costs. By removing the powerwasher, we’ve also gained considerable floor space that we can use for storage, production or assembly. In addition to this, our component construction department now has more design freedom. It doesn’t matter anymore if parts have water-drawing geometries - even highly delicate cavities can be cleaned reliably”, said Reimann. The increase in available space is also due to the fact that costly and energy-intensive drying systems are no longer required and this represents a milestone for the BMW Group with regard to the integration of different fender preassemblies.

Topcoat line to go CO2
Meanwhile, BMW is already planning another project with acp to be installed at Landshut. Thanks to the good cleaning results, high cost-effectiveness and sustainability as well as other advantages, the BMW Group has now decided to equip a topcoat line with the compact CO2 cleaning system. APS will report on this as soon as it is up and running and proven.