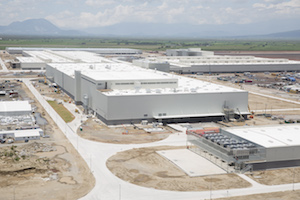 During the recent presidential campaign, Donald Trump was severely critical of the North American Free Trade Agreement (NAFTA) which allows Mexican-made vehicles to be imported tariff-free to the US. At various times, he threatened to rip it up, or at least renegotiate it to give US workers “a better deal”. Trump coruscated Ford and GM for switching production to Mexico, despite the US factories which lost this small car production generally seeing it replaced by larger and more profitable SUVs or crossovers. Moreover, most of these plants are now running at close to full capacity.

Unsurprisingly, Trump would rather Ford and GM had built plants in the US, but the OEMs say that making small cars in the US is not economical (similar to the claims of French makers regarding the production of B-segment cars in France). A 35% import duty is the stick with which Trump threatens to beat the US vehicle companies, but whether this would be enough to force a major change in production geography is another matter. Not long after the election result emerged, Ford’s CEO, Mark Fields, confirmed that the company’s Mexican plans would go ahead unchanged. Moreover, because Mexico has free trade deals with countries and regions beyond NAFTA, notably the EU, Mexican factories are assuming a global supply role beyond their dealings with the US.

Around 2.4m cars and light trucks are shipped across the border into the US every year; some of the vehicles made, or due to be made, there are also produced in Europe in a similar guise. Since EU imports face only a 10% tariff, and Mexican exports to the EU have no duty applied, a swingeing US tariff on Mexican vehicles could make it effective to make some models in Germany for the US and for Mexican factories to supply Europe. This could very well be a scenario that BMW will for consider for its 3-Series production network. Indeed Volkswagen, at its press conference on November 18, said that production of the Golf Mk8 for North America would come back to Germany from Mexico.

For now, what President Trump will do is unknown, and it is possible that his rhetoric will be translated into a less severe reality. On the other hand, Trump may decide to ignore the industry’s entreaties and impose tariffs on Mexican-produced vehicles; given the seismic political shifts which have occurred in North America and Europe this year, nothing should be ruled out.

High tariffs will almost certainly cause vehicle-makers to reconsider their production footprints and they may look to produce more vehicles in the US, which would, of course, allow Trump to claim that jobs were being brought back home. However, car companies make decisions for the long term and – even assuming that they agreed to move production back to the US – such moves would be neither quick nor easy. New US factories, or expansion at existing sites, would be required (and expensive write-offs of Mexican investments would follow, damaging the OEMs’ balance sheets).

President-elect Trump has certainly threatened the automotive industry with change but we must wait to see if he will be able to force its production geography in the direction that he wants.