OEM efforts to reduce waste range from material recycling, component remanufacturing and new water treatments all the way through to building sustainable factories for the future 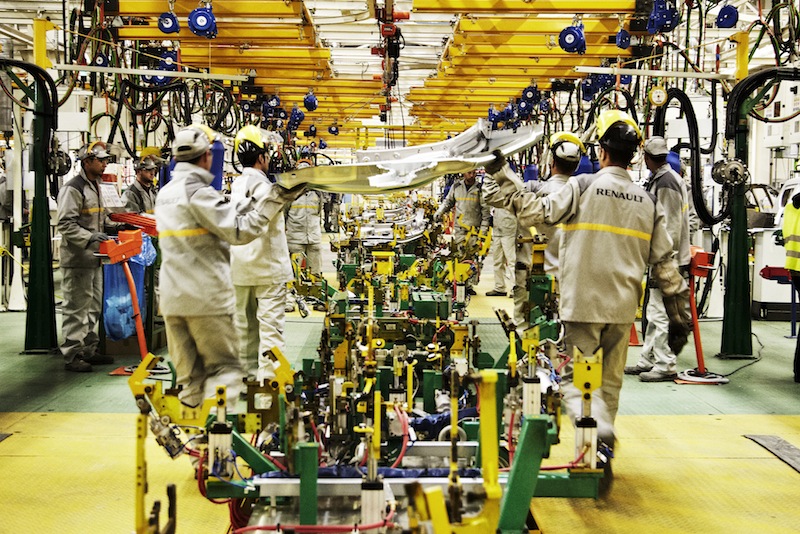 The spotlight has never shone more brightly on the environmental credentials of automakers around the world. While much of the attention is rightly focused on energy efficiency and harmful emissions, the question of managing the waste that is a by-product of the various manufacturing processes is just as crucial.

An aim common to all manufacturing sites is zero, or near-zero, landfill. The recycling of paper, packaging and pallets has been successfully handled in the early wave of environmental awareness. Now attention is broadening to other sources, and the results can be impressive. For example, last year Ford introduced a new plan to reduce waste sent to landfill by 40% on a per vehicle basis between 2011 and 2016 globally. This is on top of a reduction of 40% achieved from 2007 to 2011. Last year saw a further reduction of 5.4% on 2012, with approximately 49,800 tonnes of waste to landfill.

With regard to hazardous waste, Ford facilities worldwide generated around 43,000 metric tonnes in 2014, which is comparable to the 2012 level despite increased vehicle production. However, hazardous waste on a per vehicle basis was 7% lower compared with 2012 and has been reduced by 27% over the last five years.

Tying the material loop
Closed-loop recycling is a way of recycling production waste and scrap from end-of-life parts into material that has parity with new resources, being used in the same type of products. With this method, the same material can be used repeatedly, thus greatly reducing CO2 emissions and environmental impact over the product lifecycle. Nissan, for example, is focusing its efforts on closed-loop recycling of steel, aluminium and plastic. Accounting for a large proportion of the content of a vehicle, these materials have a major environmental impact when they are extracted and require a large amount of energy for production and disposal.

“Reducing waste is a crucial part of our strategy toward building a world-class manufacturing system” – John Fleming, Ford

Nissan is working to reduce the steel and aluminium scrap in the manufacturing process and collaborating with partners to collect and reuse this scrap as material for new vehicles. The OEM is also collecting end-of-life aluminium wheel rims, with around 2,700 tonnes recycled last year.

Meanwhile, in Japan, Nissan is collecting plastic in the form of finished bumper scrap generated at its plants and turning it into recycled plastics in a reprocessing line set up at the Oppama plant. Recycled plastics have already been given new life as bumpers in Nissan LEAF and many other new vehicles. Exchanged bumpers collected from dealerships are also being recycled as materials for under covers and other components.

Through these efforts, Nissan plans to reduce the amount of waste from its factories by 2% in Japan and 1% worldwide each year, compared to waste levels expected if no special steps had been taken from 2011 onward. The scheme is already bearing fruit. In 2013, the waste per vehicle produced was 44.62 kg, a decrease of 1.9% from the previous year.

Starting from scratch
There are often severe challenges involved in optimising an existing plant for waste management, but building a brand new plant vastly improves the opportunities for progress. For example, when Renault set about planning its new production facility in Tangier, Morocco, the plant itself and the manufacturing processes within it were designed from the outset to reduce waste and emissions.

The Tangier site began producing cars in 2012, with a capacity of 170,000 vehicles on the Logan (B0) platform – a mixture of the Kangoo passenger car and light commercial vehicle (LCV), Dacia Logan, Dacia Sandero, Peugeot Partner and Citroën Berlingo. Its environmental impact has been reduced to levels that have never before been reached by a bodywork assembly plant: CO2 emissions cut by 98%, the equivalent of about 135,000 tonnes of CO2 per year; no industrial wastewater discharged into the natural ecosystem; and the quantity of water consumed in manufacturing down by 70%.

“These results have been achieved by optimising the manufacturing processes to reduce the need for water and the corresponding discharges, and using leading-edge technologies developed by Veolia Environment to recycle all the industrial effluents,” explains Jacques Chauvet, Renault’s region leader. “A number of steps are required to transform the effluents into purified, demineralised water. This water, which meets the quality standards of the processes, can then be reused on the vehicle production lines.”

Acccording to Chauvet, Renault has made “a genuine breakthrough” at Tangier in terms of the environmental impact of automotive manufacturing. “This project, on an unprecedented scale, was made possible by reworking many of the processes in the group’s brand new plant,” he states, adding that, “It is perfectly in line with the environmental policy that Renault has been pursuing since 1995.”

A lengthy problem
At Ford’s Van Dyke Transmission Plant in Michigan, cutting waste-to-landfill has always been important, and between 2010 and 2012 the site kept 111 tonnes of waste from landfill. But last winter a small, local committee played a major role in solving a nagging ten-tonne problem. The solution to keep 8ft, 350-pound fabric coolant filters from being sent to landfill each month has enabled Van Dyke to become Ford’s first North American zero waste-to-landfill transmission plant; it now diverts 15 tonnes of waste from landfill per month.

The local committee worked with Ford’s Powertrain Operations and the Environmental Quality Office to develop a way to properly manage the waste filters by finding separate recyclers for the used filters and the materials they contained post-use.

“Reducing waste is a crucial part of our strategy toward building a world-class manufacturing system,” says John Fleming, executive vice president, global manufacturing and labour affairs. “By applying standard waste reduction processes across our global facilities, we are, through our actions – and not just words – improving the quality of life where we do business.” There are also financial benefits; in 2012, Ford generated $225m in revenue through the recycling of 568,000 tonnes of scrap metal in the US and Canada alone.

A new world of water
In these days of growing concern about the possible scarcity of clean water in the wider world, carmakers are increasingly treating it as a valuable commodity. For example, Audi has introduced an innovative membrane bioreactor (MBR) at its Ingolstadt plant in Germany to improve its use of water on a long-term basis.

Wastewater is processed in two stages inside the on-site reactor. Firstly, bacteria clean the water. They break down organic pollutants such as paint solvent, while inorganic pollutants like heavy metals – nickel and zinc – attach to their surface and are thus retained. In a second step, membranes prevent the bacteria from entering the wastewater.

“This so called ultra-filtration doesn’t occur in conventional purification plants,” explains Antje Arnold from Audi’s operational environmental protection team. “We use membranes with permeability below the micrometre level. They are so fine that they present an absolute barrier to bacteria and viruses. The processed wastewater is of a very high quality and can then be reused as service water.”

MBR technology is reducing the annual consumption of fresh water for production at Ingolstadt by up to 40% – saving 500m litres. “No other automaker worldwide is using a membrane bioreactor to recirculate water,” adds Arnold. 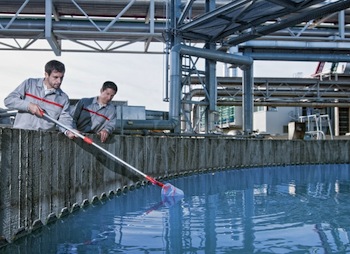 Audi is continuing systematically with its efforts to conserve water. Two different grades of water are in use at Ingolstadt: drinking water where absolutely necessary, and service water for everything else. Audi draws its water from sources such as the Lepsinger Springs and the site’s own Karst Spring, but the supply is limited.

A further proportion of service water comes directly from rainwater, collected from 450,000 sq.m of roof and car park surface and piped into five reservoirs and two storage channels. The water can then be drawn off as required.

In order to allow some of the service water to be reused, it is purified in a processing plant. “We want to achieve the best possible quality,” says Gerhard Scharrer, who is responsible for water and wastewater analysis at the Ingolstadt plant. All processes in the water circulation system are monitored. First, dirt particles are removed from the used service water in several stages, after which the pH level is adjusted. The water is then circulated back to production via a pumping station at the water works. “Then the circuit starts again from the beginning. We process our service water this way round the clock,” adds Scharrer.

Yet, as the plant’s need for service water and cooling is set to increase in the coming years due to new buildings, it is the membrane bioreactor which is intended to secure Audi’s ecological water supply for the future.

Going green in the paintshop
When automotive companies turn their focus to environmental concerns, their gaze often falls on the energy-hungry and emissions-heavy paintshop. For example, when Ford began production of its all-new Transit at the Kansas City Assembly Plant earlier this year, it unveiled an industry-first paint technology that both increases finish quality and reduces waste. Developed by the OEM and its paint suppliers, the new two-wet, monocoat paint process results in more durable paint, uses less energy and water, and reduces CO2 and particulate emissions compared with conventional paint processes. 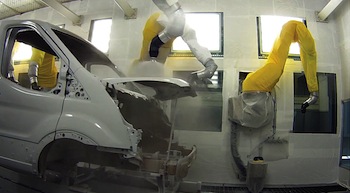 The two-wet, monocoat process uses a primer coat that requires only a few minutes of open-air drying time before the colour coat is applied. The latter is formulated with the same appearance and protection properties of the clear coat, eliminating the need for a separate clear coat. The painted body is fully cured in an enamel oven after the colour coat is applied. The total process removes one paint application step and one oven drying step when compared with conventional paint processes. This will result in 9,500 tonnes less CO2 and 35 tonnes less particulate emissions on an annual basis.

Making new parts from old
Ancillary remanufacturing at Audi’s Ingolstadt plant gives old, disused and broken starter motors and alternators a new, second life as original spare parts. What otherwise would have to be disposed of as waste makes its way back into material circulation and enables Audi to save around 240 tonnes of steel, 100 tonnes of copper and 80 tonnes of aluminium. The material used to make a new starter motor is 3.5kg, while that consumed in reconditioning amounts to just 0.4kg.

They may be remanufactured, but the parts are essentially as good as new. The components are completely taken apart and checked for damage, then cleaned, lubricated and finally reassembled. Only 5% of parts require replacement, while consumables like ball bearings, bushes and carbon brushes are all completely renewed. In around ten working days, the defective and dirty old part is transformed – and is granted the same two-year guarantee as a new one. The financial saving for the customer can be up to 40%.

Alongside the savings in material resources, the consumption of energy and CO₂ is reduced compared with the production of new parts. Per starter motor, there is a CO₂ saving of more than 2kg.

Whether it is energy, CO₂, water, chemicals or paint fumes, the attention of carmakers will continue to focus on waste reduction, both as a financial benefit and a regulatory necessity. However, much of the easy gains have already been accomplished and it will require innovation at both the corporate and local level to maintain progress.