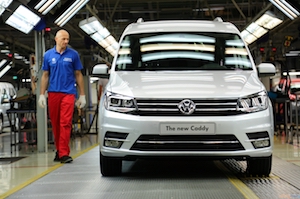 Poland - The two millionth Caddy recently rolled off a production line at Volkswagen's plant in Antoninek, Poznań. This marks an important milestone for the facility, which has been making the model since 2003.

Around 720 Caddys are produced at the plant every day, and 165,000 units were built in 2017 alone - an increase of 3.8% compared to the previous year. Various variants of the T-series, including pick-up, panel van and Kombi, are also made at the plant.

"Our entire attention on this special day is on the employees of the plant in Antoninek, where the Caddy has been produced with great success for more than 15 years," commented Dietmar Mnich, Poznań plant director. "Initially in the third, now in the fourth generation of vehicles. The underlying principle of this plant is to repeatedly reinvent itself and focus on the future. For manufacturing the Caddy has a great deal to do with the conscious feeling that you are making a very special car – an all-rounder for the needs of everyday life."

The plant is also reportedly undergoing a major transformation, with a €200m (US$246.36m) investment being made to ready it for the introduction of the new Crafter in 2019.