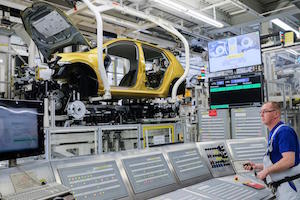 Germany – The OEM said the funds will be used to implement its Transform 2025+ strategy, focusing on “the further development of modular production, the continuation of the model offensive and further orientation towards e-mobility”. The investment, equivalent to $27 billion, will be spread over five years to 2022.

“The investment package which has now been adopted will give a decisive boost to the largest product and technology offensive in the history of the brand,” commented Herbert Diess, CEO of Volkswagen (VW). “It is our objective to position Volkswagen sustainably in the lead in the volume segments and to take up a leading position in e-mobility.”

Expenditure in Germany will account for €14 billion of the investment, including €1 billion for the transformation of Zwickau Plant into a pure e-mobility centre. At this location, VW will concentrate the series production of its upcoming electric vehicles (EVs) based on the new modular electric drive kit.

Due to be launched in 2020, the I.D. will be the first of the new-generation EVs, which will have “innovations previously only available on cars in the premium segment”, according to the vehicle-maker. VW plans to launch the new EVs almost simultaneously in Europe, China and the US. It expects production volumes to reach 100,000 units by 2020 and hopes to hit the 1m milestone for its EVs by 2025.

As part of the transformation, some models will be relocated from Zwickau, with Wolfsburg receiving €2.9 billion to accommodate the next-generation Golf and Emden taking €1.1 billion to manufacture the Passat from the end of 2018.

Other factories in VW’s global production network, such as Pamplona in Spain, Palmela in Portugal and Bratislava in Slovakia, are being prepared for additional MQB (modular transverse matrix) vehicles. The OEM added that “groundbreaking, market-oriented SUV projects” are planned for plants in Mexico, the US, South America and Russia.

Meanwhile, the company’s component manufacturing operations in Germany will also receive significant investment: €750m at Brunswick, €1.5 billion at Kassel and over €800m at Emden.