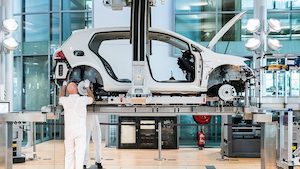 Germany - The Volkswagen Group has revealed that it will build battery electric vehicles (BEVs) in 16 different locations around the world by the end of 2022. The company currently makes BEVs at just three of its plants - in Wolfsburg, Dresden and Bratislava - but wishes to expand this number to nine within the next two years.

"Our Zwickau plant will be converted to run exclusively as an e-mobility hub," commented Matthias Müller, CEO of VW, at the OEM's Annual Media Conference in Berlin. "From 2019, it will make the I.D. family models, and also MEB models for other brands. Preparations are in full swing. Also by 2019, the Porsche main plant in Zuffenhausen will enter the electric era."

The decision to produce BEVs in 16 locations around the world could be crucial for the VW Group as it hopes to build three million units every year by 2025. This goal was outlined in the company's 'Roadmap E' strategy, along with a plan to offer 80 new electrified models in its portfolio.

The Group has made several recent investments in production facilities specifically for BEVs. VW recently said it would spend USS$17m on its transmission plant in the Tianjin, China, in order to house the production of motors for EVs.

Müller also touched on battery production in his speech. "Part and parcel of added value in a BEV is in the battery," he noted. "At our Salzgitter Center of Excellence we are consolidating responsibility for the development, procurement and quality of all the group's battery cells. Operations there have already started with an initial 100 strong workforce."

Preparations for pilot production of these cells are slated to commence in 2019. However, Müller was eager to emphasise that this does not mean the VW Group will make its own batteries as EV sales rise. "Building up expertise and mastering the technology does not necessarily imply that we will start large scale manufacturing of battery cells ourselves. This is not one of our core competences. Others can do it better than we can," he stated.