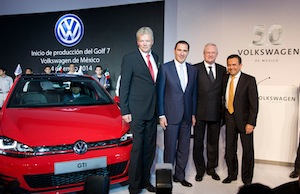 Mexico – The model will be exported to the US and Canada, and will be seen on North American roads from the middle of 2014. Derivatives such as the Golf station wagon for North and South America will also begin production this year.

Volkswagen has invested $700m in the Puebla plant, which also builds the coupe and cabriolet versions of the Beetle, plus the Jetta – all of which belong to the Golf class in terms of technology. The first Golf sedan to be made in Mexico is the Golf GTI. Production capacity for the Golf at Puebla is 700 vehicles per day.

The “intelligent lightweight construction” of the Golf, as described by VW, is based on the technological innovations of the Modular Transverse Toolkit (MQB). The Beetle and Jetta models will be adapted to the structure of the MQB in the medium term.