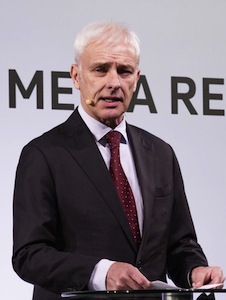 US – Speaking on the eve of the Detroit Auto Show, CEO Matthias Müller said the US “remains a core market for the Volkswagen Group” and that the company is working with the authorities on solutions for customers affected by the emissions scandal. He also confirmed production commitments in the US and Mexico.

“We know we deeply disappointed our customers, the responsible government bodies, and the general public here in the US. I apologise for what went wrong at Volkswagen,” said Müller. “We are totally committed to making things right.”

Expansion plans in North America will continue with $900m invested for the production of a new, mid-size SUV at the Chattanooga factory, Tennessee – already the subject of a $1 billion investment. VW says the addition of this model, due to roll off the assembly line by the end of the year, will create 2,000 jobs in the US. In Mexico, the Audi Q5 will start production in San José this spring, as planned, while preparations continue to introduce the longer version of the Tiguan at Puebla in 2017.

In 2015, VW delivered 9.93m vehicles worldwide, including 600,000 in the US which represented a slight increase on the year before.