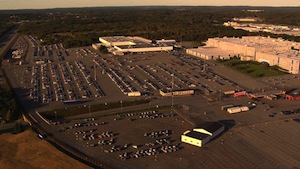 Sweden – The manufacturing facility, inaugurated on the OEM’s 50th anniversary at the location, covers 24,000 sq. ft and will boost its annual capacity from 200,000 to 300,000 units. The move will bring Volvo closer to achieving its long-term goal of selling 800,000 cars per year.

The bodyshop will be used to make the new XC90 SUV, which will be launched later this year and will go on sale in the first quarter of 2015. This model is the first to be based on the new Scalable Product Architecture (SPA), a flexible system for producing a range of models that is intended to improve design, economies of scale and safety.

The new facility will use 300 robots but features a significantly decreased level of automation on the production line in order to reduce investment costs and improve floorspace utilisation. Teams will also be smaller than elsewhere at Torslanda, with five to eight personnel rather than 15. All team-members will be able to conduct fault tracing, corrections and maintenance. According to Volvo, this will create “a more flexible production process” which will cut stoppage time, increasing efficiency and volumes. The new facility will employ 80 qualified personnel.

“This investment shows very clearly that Volvo Cars believes in Sweden as a production location and also the importance of having manufacturing close to research and development,” commented Lars Wrebo, senior vice-president, Purchasing & Manufacturing, Volvo.

The new development at Torslanda is part of an $11 billion transformation plan, which will see almost half of Volvo’s investment spent on developing its new vehicle architecture and Drive-E engine range.