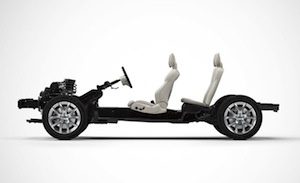 Sweden – The OEM has announced that plug-in hybrids will be introduced across its entire range, in the expectation that electric vehicles will make up 10% of total car sales in the medium term. Volvo will also develop an entirely new range of electrified smaller cars, plus a fully electric model by 2019.

The upcoming range of smaller 40 series cars will be based on the newly developed Compact Modular Architecture, which – like SPA – has been designed from the outset for electrification. As for the all-electric vehicle for sale by 2019, Volvo says it will release details at a later date.

Håkan Samuelsson, president and CEO of Volvo Cars, said: “We believe that the time has come for electrified cars to cease being a niche technology and enter the mainstream. We are confident that by 2020, 10% of Volvo’s global sales will be electrified cars.”

Pointing to the company’s 40 years of experience with electrification, Peter Mertens, senior vice-president for R&D at Volvo, added: “We have come to a point where the cost versus benefit calculation for electrification is now almost positive. Battery technology has improved, costs are going down, and public acceptance of electrification is no longer a question.”