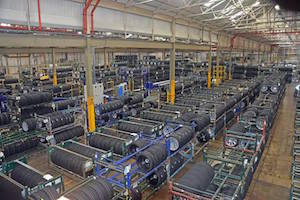 UK – The facility in Coventry will be inaugurated in September, replacing a 30-year-old operation nearby. The new factory is intended to supply premium brands such as Jaguar Land Rover (JLR) as well as high-volume manufacturers such Vauxhall.

“Our new plant covering 150,000sq.ft is over 50% bigger, and the investment in a new assembly line with the latest automated technology means that we can complete a wheel and tyre assembly in only 12 seconds compared to 20 seconds on the old line,” said Phil Spencer, sales and business development director at Voith Industrial Services.

According to Spencer, the new line can handle as many as 1,000 wheel and tyre derivatives, with the capacity to produce almost 1m assemblies per year on a two-shift basis, or 1.5m on three shifts.

Construction of the new factory began in May 2015 and installation of the 90-metre assembly line, with 16 workstations, started in January this year. Several weeks of commissioning to tackle the current 700 derivatives have now been completed. Voith says it will start to transfer the line from the old facility in July, creating a combined capacity of 2.5m assemblies per year on three shifts. The company has already commenced the assembly of wheels and tyres for JLR and ramp-up will continue over the next few weeks.

Voith keeps its UK headquarters at Warwick and employs 2,600 individuals in the country, mostly at customer sites.