The need to multiply the number of colour changes on their paint lines sees car manufacturers waste thousands of litres of paint every year. Sames Kremlin says new innovations can reduce waste and cost 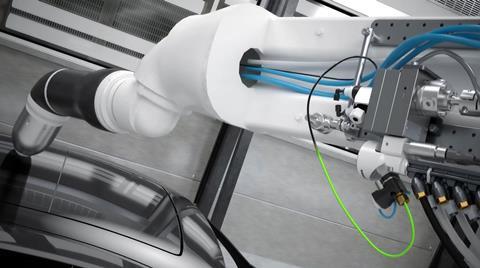 In a perfect world, car factories would produce cars in large batches of single colours. Colour changes would be rare events with unit cost (40cc of paint, or about €0.48*) considered negligible.

Unfortunately, producing cars in large colour batches is incompatible with the manufacturers’ production scheduling, which is organised according to orders, to speed delivery and limit their stocks.

So, based on this fact, colour changes are necessarily frequent, and with changes made every 5 cars or even every 2 or 3, they are very expensive. For example, if a line that produces 16,800 vehicles per month changes colour every five cars, it throws away the equivalent of €19,350 worth of paint every year, increasing to €32,200 if colour changes are made every three cars.

Moreover, with the current trend towards multiplying the number of colours and options available to customers, the ‘standard’ vehicle no longer exists. This strategy, justified by marketing issues, thwarts any desire to produce a single colour in volume.

Paint recovery systems
But since the cost of paint losses from these frequent colour changes is substantial, automotive paint line equipment suppliers have looked to develop solutions to address this issue. For the past 20 years, they have been limiting these losses to 40cc by removing the residual paint from the end of a colour run with air and solvent, between the colour changer block and the sprayer.

The operation has evolved, now pushing the paint directly with solvent in a process called ’push out’. The solvent flows faster in the centre of the hose than on the edges – a principle of fluid mechanics – and applies a strong push. This simple, easy-to-use system recovers about 50% of the paint.

The limits of pigging systems
At the same time, the so-called pig systems have appeared. They send a cylindrical plastic part, the “pig”, into the pipe, propelled by compressed air. Thanks to its joints, the pig rubs the edges and carries away the paint to the sprayer. It is very efficient, with the total paint lost being less than 10cc.

However, this performance has not led to a wave of investment on the robot process arm. Scraping systems are used in less than 5% of the world’s automotive plants. They are expensive, and complex to install and maintain. The pig wears out quickly, or wears out the inner wall of the hose, as it travels in one direction (paint removal) and then in the other (return to its starting point). Particles of material can come off and contaminate the paint. Also, the pig is so tight to the size of the hose that it can get stuck. While the pig is being located and retrieved, the applicator robot and line are at a standstill. 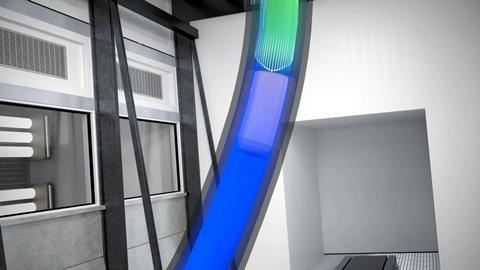 A frictionless shuttle system
A new system proposed a few months ago by Sames Kremlin, overcomes the difficulties with standard pigging systems. The pig is replaced by a cylindrical “shuttle” with a slightly smaller diameter (3.85mm, as opposed to 4mm for the inside of the hose), which eliminates friction and the risk of blockage.

Logically, it recovers less paint than the pig, 18cc of loss instead of 10cc. But 18cc instead of 40cc is already a 55% saving. Moreover, the reliability of this shuttle is exceptional. Endurance tested in Sames Kremlin’s laboratory, it has withstood 600,000 cycles, i.e. 7 to 12 years of colour changes on line.

Another innovation is the shuttle being pushed by solvent instead of compressed air. This saves a few seconds on the tint change cycle; the solvent cleans the paint hose while pushing shuttle during the last few seconds of spraying paint. The solvent cannot pass through the sides of the shuttle and pollute the paint. As explained above, it is in the centre of the tube that it circulates most rapidly. In other words, it carries the shuttle and the paint faster than it can flow around the edges.

When the shuttle arrives at the sprayer it stops the paint sprayers. The colour change starts by returning the shuttle to its starting point using flushing trains that alternate between compressed air and solvent. The entire cycle takes 10 seconds, compared to 15 seconds with a standard pigging system. 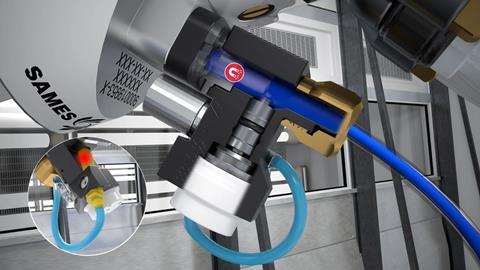 No wear and tear and an ROI of 6 to 12 months
Another feature of this system is a magnet fitted in the shuttle body that allows it be propelled in the flow towards the sprayer by activation of a counter-magnet, and be located thanks to a magnetic sensor in the start station. No moving parts, no wear, no risk of breakdown.

The system, called PaintSave, is simple, lightweight and compact enough not to slow down or strain the robot’s arm, and reliable enough to handle high-speed production. In addition, it cuts the cost of lost paint volume by more than half. That’s an annual saving of €10,000 to €16,000 per robot applicator, based on the examples cited above.

The PaintSave ROI is thus achieved in 6 to 12 months. In the United States, an automotive production site has been using it daily since December 2020, and the OEM has already ordered several more PaintSave systems for its factory in India.