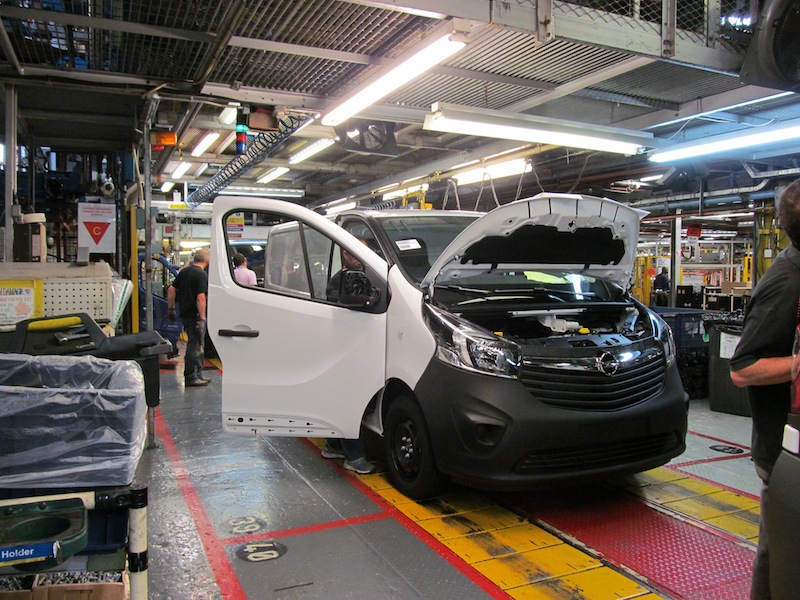 In late August this year, GM’s last remaining light commercial vehicle (LCV) plant, at Luton in the UK, started series production of the new Opel/Vauxhall Vivaro after securing a £185m contract. In June, the facility had commenced low-volume production, try-out of the expanded UK supply chain and testing of the efficacy of the new manufacturing equipment. Meanwhile, production of the old Vivaro model ceased at the beginning of August, with nearly 1m units made since 2001, including 44,000 last year; more than half the output was exported to Europe.

Renault will produce all the X82 versions it needs at its Sandouville factory in north-west France. On the X83 programme, there was an assembly line at Nissan Barcelona because the paintshop at this factory was tall enough for the high-roof version; however, Nissan is not taking part in the X82, having developed the NV200 van on its own despite the existence of the Renault-Nissan Alliance.

When GM was in Chapter 11 in the US and Europe was in the midst of the recent recession, the future of the Luton factory was in severe doubt and there were many occasions when it could have closed. According to the plant director, Mike Wright, shutting Luton would have been “an easy decision” for GM’s senior management. However, a great deal of work by both the local management and the unions produced a flexible labour agreement which has now secured the future of the plant into the 2020s – and that of its 1,200-strong workforce, plus many more in the supply chain.

Shifting to a new operation

Luton will produce four main body styles for the new van, namely: a conventional panel van, plus combi, double cab and platform cab versions.  As with the old model, owing to height restrictions in the Luton paintshop, GM will outsource the high-roof version; this time it will go to Renault Sandouville, rather than Nissan Barcelona.

In terms of special editions and conversions, GM will produce as many of these as possible within Luton, following the opening of a conversion centre at the plant in 2009. The work will take place either on the main assembly line or with some operations carried out off-line in dedicated cells; the division of labour will depend on each task’s impact on the speed of the assembly line. The line currently operates at a maximum speed of 28 jobs per hour, which translates into a takt time of just over two minutes. Thus, if special vehicle or conversion modifications can be completed within this takt time, they will be carried out on the assembly line; any task requiring longer will be performed in a dedicated off-line cell.

By keeping the special vehicle operation in-house, GM can maintain full control over this aspect of its business, as well as saving on the logistics and additional costs involved in using outside suppliers for such work.  As far as possible, GM’s policy is to do everything in-house, whether on- or off-line.

Stamping in the UK
The majority of the Vivaro body pressings come from the UK, either stamped in the Luton press shop or at one of four suppliers: Covpress, Stadco, Gestamp and Milton Keynes Pressings. In addition, a small number of large pressings are produced by Renault Sandouville: the bonnet, roof and front door outer panels. In return, parts such as the floor pan take the 12-hour road journey from Luton to Sandouville.

The Luton press shop used to be one of GM’s most important operations in the 1970s and as recently as the early 1980s it had around 30 lines and delivered pressings to GM assembly plants across Europe. Now this press shop is much reduced in both size and the customer base it serves; just two tandem press lines supply the operations at Luton, and to a lesser extent Renault Sandouville.

Before the steel reaches the presses, each 22-tonne coil of steel passes through a Muller Weingarten decoiler, before proceeding onto a Fagor blanking line. The blanks are handled by a stacker supplied by NSM Magnettechnik which was installed in 2013, not long after the future of the plant had been secured. Once the blanks have been prepared, they are held in a storage area in the cavernous press shop before proceeding either to the E or M press line. These are tandem lines, each with a lead press and four follow-on presses.

The E line consists of a 1,200-tonne lead press, with four 800-tonne presses following. By comparison, the M line starts with a 2,000-tonne Erfurt press, followed by a 1,500-tonne and three 1,000-tonne British Clearing presses which have inter-press handling systems supplied by Volvo Olofstorm. The E line makes ten new parts and four carry-over parts from the X83, namely the fenders and hood, while the M line makes six new parts and two carry-over components, in this case the door inner panels.

Investing in the future
Luton has received a very welcome new investment to support production of the X82 Vivaro. In particular, GM has spent £76m on new Fanuc robots in the welding shop and paintshop. The welding robots use adaptive welding which can adjust the thickness of the weld that is applied. Meanwhile, in the paintshop £6m has been spent on a new seam sealer; this is regarded as a necessity for GM to be able to offer a ten-year warranty. 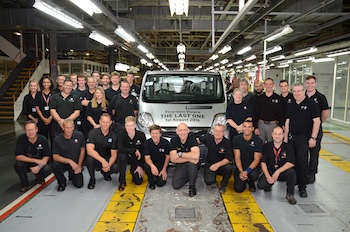 One of the most important aspects of the new Vivaro production is the 40% UK content, compared with 25% on the previous model.

The major components which are now UK-sourced, having previously been bought abroad, include exhausts supplied by Tenneco-Walker, fuel tanks from TI and carpets from IAC. In addition, UK suppliers are now used for the front cross member, screen wash tanks and hoses, plus the GPS antenna.

Production of the previous-generation Vivaro may have ended, and the 957,107th such unit now resides at Vauxhall’s Heritage Centre in the Griffin House headquarters, but committed management and modernisation – plus a fresh contract – have ensured that a new era is beginning at Luton.