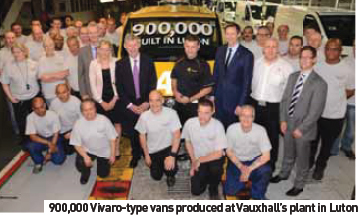 UK – The 250,000th Astra Sports Tourer has been produced at Ellesmere Port and Luton has built its 900,000th Vivaro-type van.

Both plants have been allocated new products securing production into the next decade. Ellesmere Port was awarded the accolade of lead European manufacturing plant for the next generation Astra.

The Luton van facility will build the next generation Vivaro with production starting next year. Facility changes have begun with upgrades to the body shop.

Significant investment has been made in the project including €95m ($125m) in the specific plant changes, €112m in vendor tooling, of which €34m is in the UK and €12m on facilities. The plant will source 40% of its content locally for the new vehicle.