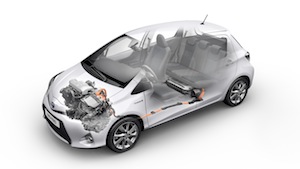 France – The move has been made to accommodate an increased production plan for 2014 of 220,000 units, following particularly successful sales of the Yaris Hybrid. The 15% boost in output will require an expansion of the workforce by 500 temporary personnel to a total of 4,000.

Toyota Motor Manufacturing France (TMMF) will implement some Saturday production to meet demand before the third shift is implemented. A number of employees from the existing two shifts will move to the extra shift on a voluntary basis.

According to Luciano Biondo, senior vice-president of Manufacturing, TMMF will produce “close to 1,100 Yaris per day” on the three-shift regime, in comparison with 840 on the current two shifts. He added that the change “demonstrates the success of the ‘Made-in-France’ Yaris on [sic] a very competitive segment”.