Turning in the right direction

When it comes to selecting a new machining centre, there are pros and cons to spindle orientation 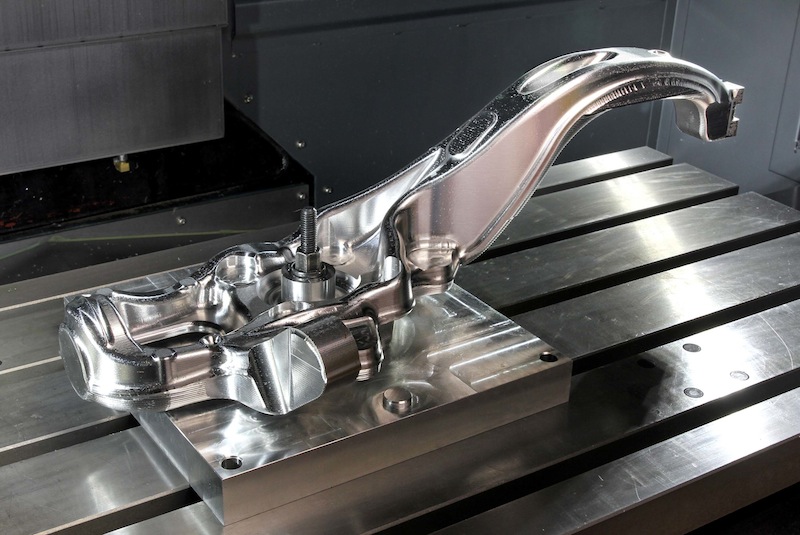 Not so long ago, there was a clear distinction in the choice between vertical and horizontal machining centres; vertical generally favoured precision while horizontal favoured production. However, over the course of the past 20 years the line of differentiation has become blurred as machines from both camps now break into the territory of the other.

One contributory factor is the advent of five-axis machining in relation to vertical spindle configurations, as can be seen at Philip James Precision Engineers in Coventry, UK, which machines prototype suspension, chassis and steering components for almost every current and future make of Jaguar, Range Rover and Land Rover, including the L550 (‘Baby Discovery’). Batches of around 50-off are typical. At Philip James, this technology has helped to reduce the machining of knuckle bores for Jaguar Land Rover (JLR) from 2.5 hours to just 20 minutes.

Knuckles require intensive milling. They start as a solid round aluminium billet that is typically reduced from 94kg to less than 6kg by machining. According to managing director Philip Whitehouse, one of the front knuckles for JLR was proving “problematic” to machine. "While most of the milling and drilling could be performed on one of our three-axis Hurco machining centres, the component then had to be transferred to a CNC jig borer for five holes to be interpolated at three different angles – and therefore in three set-ups,” he comments.

As a result, Philip James decided to buy a Hurco VMX42SR five-axis machining centre to interpolate all the holes to within ±10µm in one automatic, 20-minute cycle, which as Whitehouse points out is “much faster than the 2.5 hours it used to take on the jig borer”. Apart from decreasing the cycle time, the new five-axis process eliminates the need to use a tooling hole for component alignment prior to boring. One-hit machining on the Hurco also allows Philip James to swap between producing the two hands more quickly. This is important, as JLR often cannot wait for a full batch of, say, 20 left-hand and the same number of right-hand knuckles to be delivered in one consignment.

The Hurco VMX42SR is the first five-axis machining centre at Philip James, and Whitehouse asked the manufacturer for a modification that would enable the B-axis head to be tilted past horizontal and allow cutter access for all JLR knuckle bores to be interpolated in one hit. The required negative angle was -8°.

In fact, Hurco engineers removed the limit switch on the head, allowing it to tilt up to -20°. This meant that other features like undercut faces could also be machined without repositioning the part on an angle plate, again saving time and improving accuracy. The modification means that the head guard comes close to the table and especially near to the laser tool measuring device. To avoid any chance of collision, the subcontractor uses Work NC CAM from Vero Software to programme the machining cycles and check for interference.

Leaning towards the horizontal
For high-volume production runs, it is fair to say that horizontals are often the preferred choice in the automotive industry. While verticals may generally command a more competitive price tag, suppliers of horizontals will argue that there is a huge difference between initial purchase cost and overall cost of operation, where throughput is an important factor. Horizontal machining centres favour uninterrupted production. One reason for this is that the horizontal spindle orientation encourages chips to fall away, meaning that they do not have to be cleared from the table. More significantly, the horizontal design allows a twin pallet changer to be incorporated into a compact footprint. 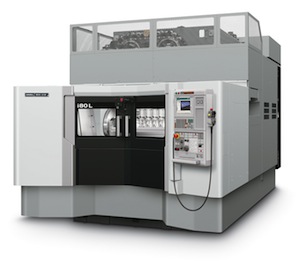 Increasingly, machine tool manufacturers and automotive companies are working together to develop machining centre solutions. For instance, the i80L is a recently introduced horizontal machine that resulted from co-operation between DMG Mori and a large Japanese automotive manufacturer.

With the i80L, DMG Mori offers an ultra-compact horizontal machining centre for the high-volume production of automotive components. The design is enabled by locating the tool magazine in the top area of the machine. Furthermore, the basic configuration has no pallet changing system, delivering a footprint of just 2,550 x 4,685mm.

In return, the machine concept provides options for manual set-up as well as for customer-specific automation solutions such as gantry loaders or transfer systems. Tthe i80L can be configured to form an automated production line for cylinder heads or engine blocks, for example.

Another feature resulting from the compact design of the i80L is the size of the work envelope. The traverse paths of the new development (in X, Y and Z-axis) are 800 x 550 x 850mm. This means that even large six-cylinder engine blocks can be accommodated.

Cutting the scrap at Stecker
Among the supply chain shops selecting a horizontal machine in recent months is Stecker Machine of Manitowoc, Wisconsin. The company required a solution to machine a large front cover casting for diesel engines which weighed 90kg and eventually opted for two Toyoda FH630SX horizontal machining centres with 8,000rpm spindles to allow heavy-duty metal removal. State Machine Tool, Toyoda's local distributor, designed and integrated a robot cell with the FH630SX machining centres using a vision-enabled Fanuc M900 robot to manipulate the parts through the cell. 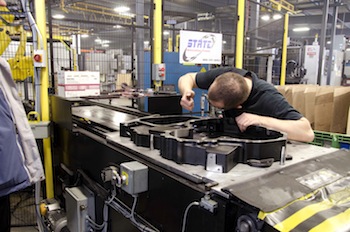 Cell operations begin when parts arrive via forklift in stacks of five, separated by plywood. The heart of the cell, the Fanuc M900 robot, uses a vacuum pad to move the plywood to a shelving unit. It then uses its vision system, which State Machine adapted for use with black painted parts, to verify the identity of the raw casting. After verifying the workpiece, the M900 robot loads the part into the machines. The first machine performs operation numbers 10, 30 and 50, while the other machine completes 20 and 40. This breakdown of operations balances the cycle times between machines and optimises output.

Transition stands are used between machines to hold parts until the next operation is available for loading. To accommodate loading and unloading on both sides of the pallet for operation numbers 10 and 50, State Machine programmed the robot to rotate pallet A by 180°. Furthermore, the machining centres use a laser eye for broken tool detection during production to minimise the risk of multiple defective parts in the event of a tool failure. After machining is complete, the robot moves the part to a deburring station equipped with a Fanuc M10 robot, before the final operation of component washing occurs.

The cell runs two parts per hour and has the capability to run two different part numbers with virtually zero downtime when transitioning. Since implementation, Stecker Machine has noticed that it is scrapping fewer parts due to increased consistency in loading and handling parts. “Output has improved by about 25% compared with the larger machines that were used prior to implementing the cell,” states the company’s vice-president, Joel Kaeppler.

Diversity in a horizontal dimension
Another machine tool manufacturer specialising in horizontals is Heller, which derives around two-thirds of its business from the automotive sector. The company offers solutions from standalone machines through to turnkey manufacturing systems costing around €150m ($203m). Heller claims to be among the top five global providers of horizontal five-axis machining centres for milling, while for crankshaft machining and light-duty powertrain the company is among the top three. It also has a strong global presence in heavy-duty powertrain applications.

The company says it has recently increased its investment in development to focus on the diversification of its product range. The result is a completely revamped product portfolio for four-axis and five-axis machining and combined mill-turning. Another addition is a completely new, small machine with easily changed tooling for the milling of light-duty crankshafts.

Meanwhile StarragHeckert, which is headquartered in Switzerland, says the combined power, precision and productivity of its HEC horizontal machining centres are proving especially popular with top tier suppliers for the single set-up machining of gearboxes, coupling housings and valve bodies.

For example, the recently introduced 500 x 400mm pallet HEC 400D can be supplied in a variety of modes to suit specific needs: for machining light alloys, cast metals and steels with rapid traverse rates of 60m per minute and spindle speeds of 10,000rpm; with Starrag’s Dynamic package featuring traverse rates up to 100m per minute and 15,000rpm spindle; and with the Power solution for heavy-duty cutting using a 37kW main spindle (350Nm torque) plus 60m per minute traverse rates.

A third way for machining

An alternative to the vertical/horizontal spindle debate is the use of multi-spindle machines for prismatic machining operations. The automotive industry is currently dominated by a tendency for increasingly precise parts. In addition, there is a cost-down trend in relation to function integration in which fewer, but more complex components are used. Finally, the pressure on costs caused by international competition leaves little leeway for non-essential equipment features.

With this in mind, the twin-spindle LiFlex II 444MC ensures that Licon’s focus is on four and five-axis machining centres that can produce complex workpieces in materials ranging from high-strength to lightweight alloys, as well as accommodating parts up to 445mm per side with a depth of 425mm. Various configurable loading systems such as gantries, robots, pallet changers and double-swivel trunnions can be supplied to optimise the load/unload process.

According to Licon, the machining of sophisticated automotive parts using traditional four-axis machines with three linear axes and a single rotary axis leads inevitably to a reduction in quality through a lack of precision caused by multiple set-ups or the use of angle heads. In contrast, Licon uses five-axis machining centres for compound angle machining in the majority of its projects.

In clamping multiple parts on a common fifth-axis trunnion, the selection of the correct spindle-side linear axes is essential. It is necessary to account for workpiece tolerances, clamping technology and thermo-elastic strains present in the process. There are some cases in which process capability can only be achieved by using individually configurable Z axes or by using X, Y and Z axes that are completely independent.

According to Licon, experience has shown that the ability to individually adjust the spindles represents significant added-value in the output of high-precision parts when the machining distances involved are large.

Machining in production & research
Okuma of Japan can also claim to be well-versed in meeting the demands of automotive manufacturers, with a 40-year history of providing OEMs and tier ones with both horizontal and vertical machine tool solutions for components ranging from transmission cases to throttle housings. Key criteria for these applications include high productivity and maximum uptime for high-volume runs. Every Okuma machine tool is hand scraped, which allows for the production of more parts over a longer timeframe, reducing lifetime cost of ownership and cost-per-part. It is also worth noting that the company’s THINC control is designed to address high-volume machining requirements such as in-process and post-process gauging, plus integration with robotics.

In addition to production applications, Okuma says that facilities such as the Clemson University International Center for Automotive Research (CU-ICAR) in Greenville, South Carolina, are proving a hotbed for its technologies. CU-IAR has $1.5m of Okuma machines on-site for its Lightweight Automotive Materials Programme (LAMP), which explores the use of titanium as an automotive component material in order to reduce vehicle weight and energy consumption.

The approach will establish a heuristic set of feasible machining parameters and then undertake the study of sensitivity of machining process inputs in relation to resultant outputs. Outcomes of the sensitivity analysis will be used to establish material selection and machining models for these materials. The models will be applied directly to machining process control for titanium component manufacturing, optimised with respect to cost while maintaining constraints on quality parameters such as dimensional stability, vibration-induced defects (chatter) and surface finish quality. CU-IAR is working on the project in collaboration with BMW.