Travel blog: The young ones 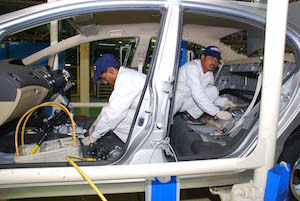 One of the most striking things about Bajaj Auto’s Chakan plant was how young most of the workers were. According to my guide around the factory, deputy general manager Sunil Deshpande, the average age of the workforce there is 24. Now, there is a suggestion that seeing everyone else as ‘young’ is a sign of your own advancing years and I will concede this may be a factor in my case, but the relatively low age demographic was also noticeable at my next two plant visits (GM Talegaon and Toyota Bidadi). Given what I had learned so far from my visit to India, it seems that the energy and aspirations of this young workforce are being seen as key drivers in the growth of the country’s automotive manufacturing sector.

At all these plants, I was made aware of the importance placed on the workers being proactive in developing their own roles (at every level) within the various production operations and the encouragement for them as individuals to take ownership of the operations they perform. I know this is nothing new; engaging employees with their tasks is a proven way of improving efficiency and productivity, often more so than simply automating the task, however, there is a real sense of a more focused approach here. This people-centric strategy to progress each OEM’s respective plans for growth is certainly a very positive one for the workforce as a whole and reveals a degree of long-term thinking. It also plays to one of the region’s strengths – a large, cost-effective workforce – and reflects the fact that automation levels in Indian automotive manufacturing are still relatively low.

It isn’t just the workforce which is getting younger in India. Each time I visit, the number of new cars and motorcycles on the roads appears to grow as some of the older vehicle types (Hindustan Ambassador taxis, for example) seem to become much rarer. Even the Tuk Tuks are looking brand new!

In addition, it seems that we can expect a glut of new models, both four- and two-wheeled, to be introduced to and manufactured in India in the near future.

The planned growth of manufacturing that has been revealed on this trip, and the means of achieving it, is both impressive and daunting, but certainly reflects India’s strengthening position as a major global automotive production centre.