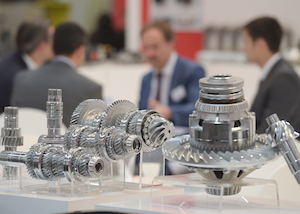 Industry 4.0 loomed large over the two major trade shows I visited recently. In the case of Hannover Messe, the show’s exhibitor board chairman, Friedhelm Loh, proclaimed that the event marked a “final breakthrough” for Industry 4.0. With hundreds of real-world examples being showcased in Hannover, Loh confidently asserted that Industry 4.0 was no longer just a vision but “an actual reality”.

Over at Control in Stuttgart, the message was equally strong: Industry 4.0 will clear a path for the march of progress. In both locations, the show booths were replete with references to Industry 4.0: literature that championed the approach and products which gave it context.

Naturally, it was context that visitors to the stands wanted to learn more about, a point confirmed to me by exhibitors I spoke with. They told me that most customers visiting the show instantly recognised Industry 4.0 as a term. However, many still required either an explanation of what it means or how their organisation can specifically benefit from it.

The advent of Industry 4.0 has turned show booths into business clinics. Consistently, the question to the supplier was not so much “what are you selling?” but rather, “can I tell you my problem?”

As an opening, customers want a technology-independent discussion with suppliers, to identify snags and establish aims. In other words, they don’t want to talk about solutions until they have a firmer idea about the change and improvement they need to make. Only then do they want to hear about the products available to them. Customers are upgrading, not merely replacing, so the conversation can’t start from the same place.

The word from the Hannover and Stuttgart events was that, while the automotive manufacturing industry is fully embracing Industry 4.0 and actively leading the change, technology buyers are still looking for guidance. Besides the solutions they are creating, the suppliers’ extra task is to describe the new business models being made possible.

Fusing the digital world with the manufacture of goods, Industry 4.0 is delivering higher productivity with reductions in costs through the collection and interpretation of real-time data. It is enabling smarter structure which in turn is raising quality, an undoubted change for the better.