Travel blog: Do the Chinese dream of electric cars? 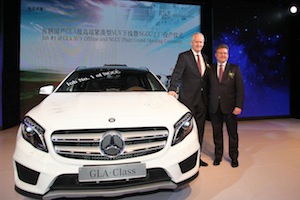 Halfway through my trip around China’s carmakers, a few things inspired me to borrow shamelessly from the great Philip K. Dick’s novel. Firstly the smog-laden, rain-soaked night skyline of Shanghai, in all its neon-lit glory, reminded me of a scene from Blade Runner, the film version of Dick’s novel. Secondly, the congestion and pollution posed the question above. I think the evidence from the market would suggest the answer is no, the Chinese aren’t dreaming of or aspiring to own an electric vehicle (EV).

However, this isn’t deterring Tesla CEO Elon Musk, who stated in an interview with Xinhua, the official state media, that he plans to localise production of his electric vehicles in China over the next few years. Given that poor sales, legal wrangles and false rumours about charging points have hampered the company in gaining a significant foothold in China, this is perhaps a bold move. But drawing on the conversations with Volvo, GM and Changan Mazda that I’ve had so far, the overwhelming focus is on the still-huge potential of the Chinese car market. These OEMs are all planning to significantly increase production capacity over the coming years, so it stands to reason that Tesla would push hard and invest to gain a strong presence in China.

On the subject of EVs, my visit to Nanjing featured my first ride in a Chinese-built electric car. As the transition from orderly queue to frantic ‘winner takes all’ grab for a taxi took place at Nanjing South railway station, I found myself in a BYD people-carrier. Being happy to have got a taxi at all, I initially didn’t pay that much attention to the vehicle I was travelling in, but I soon noticed the slightly erratic progress we were making.

At first I put this down to the driver’s lack of finesse behind the wheel, then I noticed his hunched concentration at the controls and the electronic dashboard indicating the power consumption by the electric motor. It’s hard to tell the age of a taxi if you aren’t familiar with the model or registration marks, but they often age prematurely. The interior of the BYD was smart enough but the powertrain felt unsophisticated, the driver having to work hard to keep the ride smooth.

This iteration, while perhaps not being representative of the latest generation of EVs, would make most car buyers think twice; however, as you watch the smog build up over cities during the rush hour you can imagine the Chinese wishing for less pollution – and perhaps then Tesla, BYD and others will be in a better position.