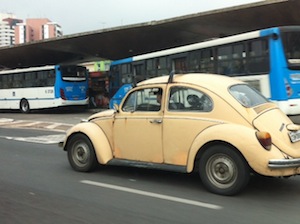 Does Brazil really need more cars? Just the reason I ask is that there seem to be plenty in the tailback I’m sitting in here in São Paulo. The city clearly deserves its notoriety as a traffic hotspot and right now I have to say that a ban on all forms of motorised transport, with one tiny exception, would gain my heartfelt support.

But the answer to my question from consumers would be a resounding “yes”. Although the past few quarters have been tough for the automotive industry and the economy as a whole, there is a general upward trend in car sales in Brazil, now the fourth largest market for vehicle-makers worldwide. Indeed, several automotive plants have recently hit record outputs, for example Fiat Betim (811,000 units in 2012) and GM São Caetano do Sul (266,620 in 2013).

Certainly, the new cars on the roads now outnumber the classically characterful VW Beetles and Combis held together by little more than rust and optimism. The population is growing richer, and as one of my contacts explained to me, Brazil has an affinity with automobiles that chimes perfectly with the idea that the car is one of the most aspirational products yet devised. The houses may still be scruffy, but the cars are getting nicer.

Considering the severe traffic, I would have thought that motorbikes would also be extremely popular with commuters, but apparently these are the preserve of lunatic couriers with short lifespans. No: Brazil is all about cars, cars, cars.

And trucks. With an underdeveloped national rail system, the majority of goods are transported by commercial vehicles – over 60%, according to Mercedes-Benz Trucks. There is also a healthy market for zippy light vans that are ideal for Brazilian Del Boys operating in urban areas. Indeed, VW recently built a new bodyshop at Anchieta for its Saveiro model to cater to this market (and anyone else who fancies an LCV which looks more like a convertible).

VW is by no means the only vehicle-maker investing in new facilities. Fiat is building a four-storey paintshop at Betim (already the largest FCA plant in the world), plus a whole new automotive hub in Goiana due to start operations next year; Nissan unveiled its $1.5 billion complex at Resende last month; and Chery and JAC will both open production sites later this year. Thus, the four big OEMs that have been in Brazil for decades – Fiat, VW, GM and Ford – have been joined by a raft of new players.

With large amounts of money being poured into the country, the stakes are clearly high. But in these circumstances – a large and growing population with relatively low car ownership but increasing affluence, a love of automotive, poor public transport and a limited rail network – vehicle-makers are surely on to a winner.