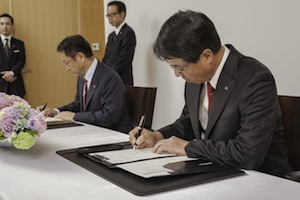 Japan – The collaboration will cover a range of areas, including environmental and advanced safety technologies. A joint committee will now be established to evaluate how to use the companies’ respective strengths so as to complement and enhance their products and technologies.

Akio Toyoda, president of Toyota commented: “As evidenced by their SkyActiv Technologies and KODO – Soul of Motion design, Mazda has proven that it always thinks of what is coming next for vehicles and technology, while still managing to stay true to its basic carmaking roots.”

President and CEO of Mazda, Masamichi Kogai, said: “Toyota is a company that has shown steadfast resolve in acting responsibly on global environmental issues and the future of manufacturing as a whole.”

A previous collaboration between Toyota and Mazda led to the licensing of Toyota’s hybrid technologies to Mazda, plus the production of compact cars for Toyota at Mazda’s plant in Mexico.

The two companies stated that this latest partnership will “go beyond the traditional framework of cooperation, aiming instead to create a whole new set of values for cars through wide-ranging medium- to long-term collaboration”.