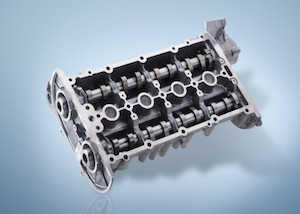 Hungary – Starting this spring, the €100m ($110m) factory will be constructed in Jászfényszaru, with a production launch planned for 2018. It will make electronic power-assisted steering systems and cylinder-head covers with integrated camshafts.

Karsten Kroos, CEO of ThyssenKrupp’s Components Technology division, said the investment “follows our strategy towards standardisation and cost optimisation in the automotive components business”. He continued: “For the first time in Europe, we are localising production of two different technologies at one site. That will be an immense help in offering competitive cost structures.”

Kroos said the strategy has already been implemented in China – where the company established a chassis components plant in Shanghai in 2014 for the production of steering and damping systems – and will be rolled out to other growth markets. According to ThyssenKrupp, the main benefits of the approach are: central planning, joint use of plant infrastructure, faster implementation of improvement measures and lower administrative costs.

According to the company, its new plant is needed to meet steering-systems orders worth several billion euros which it has recently received from global OEMs. In addition, ThyssenKrupp says the demand for cylinder-head cover modules with integrated, assembled camshafts “is still high”.

“Hungary offers good conditions for our growth plans. Its central location, good infrastructure and highly skilled labour force are the main reasons for expanding our business activities in Hungary,” Kroos stated. The new factory will employ 500 people in the coming years.

In Hungary, ThyssenKrupp already operates an axle assembly plant for Audi at Győr, which opened in 2013, and a software development centre in Budapest that is focused on solutions for electro-mechanical steering systems.