Ferrari’s red automotive masterpieces are produced at a plant that can claim to be among the leaders in green technology. Its Maranello factory is one of a growing number of auto manufacturing facilities that make use of solar photovoltaic (pv) power. Toyota, the Renault-Nissan alliance, GM, Ford and others are getting on board, with the former aiming to demonstrate that the technology is practical even in the UK.

Ferraris are associated with advanced engineering, neckcricking acceleration and the colour red but the company is staking a claim to leadership in green technology, with investment in an advanced, integrated system at its Maranello plant. In fact, its total power program has enabled the factory to reduce CO2 emissions by 40,000 tonnes a year from its peak in 2009 – a reduction of around 30%. Anything it does not generate itself, it buys-in from renewable sources. 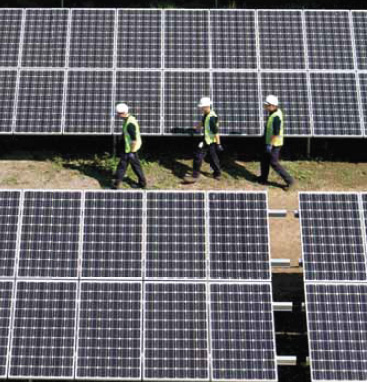 Ferrari’s triple-function co-generation power station burns natural gas to produce electricity. It uses the exhaust gases to heat its water and gets cold water from a heat-driven chiller. The company claims that the system works at 79% efficiency. That is all well and good and represents efficient use of a finite resource but, while no-one who wishes to be taken seriously will try to persuade anyone that natural gas is actually a renewable fuel, what it does indicate is a coherent and integrated approach to energy production and use.

The new buildings at the facility have been designed to require as little energy as possible and to make efficient use of what it does need. They conserve by using solar cells and the multi-generation system. It has a huge solar array, consisting of 1,075 solar panels on the roof of the mechanical machining facility that generates about 214MW. Continuing the sunny theme, the new assembly plant has large skylights and reflective plates that fill the interior with natural light – making the plant a far cry from the dark factories of the past. Ferrari makes further use of renewable energy by providing employees with bicycles and running tracks to make their way round the site, rather than scooters or small cars.

English ambition
Japanese company Toyota has a habit of setting ambitious targets, making them public and smiling politely when they are met with astonishment and scepticism. However, it just keeps delivering – whether it’s the ambition to be the largest auto manufacturer in the world, to get zero ppm defects or to cut emissions in its UK factories by 70%.

If you thought Ferrari’s solar array was big, then take a look at Toyot’s ground-mounted solar array at its Burnaston plant, near Derby, in the UK. The array extends to 90,000m2 – about the area of four-and-a-half football pitches – and consists of around 17,000 panels. They generate electricity for use on site and will help to reduce its carbon footprint and contain energy costs. It is more than16 times the size of Ferrari’s roof-mounted array and advances in solar pv technology are reflected in the fact that it is almost as efficient in producing electricity, cell for cell, as Ferrari’s installation in much sunnier climes.

Toyota’s installation is expected to save up to 2,000 tonnes of CO2 emissions annually and, along with other energysaving measures integrated into the project, will produce equivalent energy savings of around 4600MW a year. That is enough to build around 7,000 cars – or boil enough water for 150 million cups of tea, apparently – and represents around 5% of the plant’s energy needs.

Planting sustainability
The system was switched on in June 2011 and it was not cheap. The panels were all produced in the UK and cost about 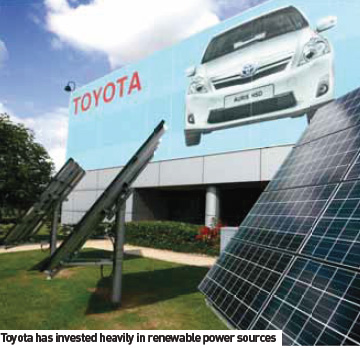 £10 million to manufacture and install, which was funded by British Gas. Toyota is leasing the land and the panels in a 25-year deal. It is not intended to simply stand alone; like Ferrari, Toyota also has an integrated plan for energy, which it has called Sustainable Plant. The company says that this strategy envisions manufacturing operations that are designed to work in harmony with their local community and surrounding environment. The UK’s is one of five Toyota plants worldwide to be designated a Sustainable Plant with first-rate environmental credentials. Toyota points to the fact that the plant produces the Auris hybrid as evidence of the company’s contribution to a lowautomotive carbon economy in the UK.

“Generating solar power on-site to supply electricity to the plant underlines our commitment to do even more to further reduce our carbon footprint and is yet another example of our environmental leadership,” said Tony Walker, deputy managing director at Toyota Manufacturing UK. Jon Kimber, managing director of British Gas New Energy claimed that solar power has the potential to help businesses cut their energy bills while reducing carbon emissions at the same time, and hailed Toyota as a “beacon for green business throughout the UK”.

To be fair, Toyota has form in this regard. In 1996 it became the first UK car manufacturer to achieve ISO14001 for environmental management, and was the first to cut the amount of waste sent to landfill to nothing, which it achieved in 2002. In 2008, it achieved zero waste to incineration. Since it was opened in 1993, Burnaston has cut both total energy and water used in the production of its vehicles by 70%. And this is far from being the company’s first large-scale solar pv installation. In 2008, Toyota Motor Sales USA completed what was then the largest rooftop solar installation in North America, at its Ontario, California parts and distribution centre. The expectation was that it would reduce carbon emissions by approaching 2,000 tonnes each year.

Renault’s six-pack
In June 2011, Renault announced plans that would dwarf even Toyota’s installation in its total scale. The French company is seeking to reduce CO2 emissions by a total of 30,000 tonnes, by the use of solar pv alone. Renault is partnering with Gestamp Solar, part of Spanish company Corporación Gestamp, to cover a total area of 450,000m², the equivalent of 63 football fields. This plan is not restricted to a single site; the plants that are now partly-powered by solar energy are in Douai, Flins, Maubeuge, Batilly, Sandouville and Cléon. Specifically, the solar panels are located on staff parking lots at Maubeuge and Cléon, and the roofs of delivery and shipping centres at Douai, Maubeuge, Flins, Batilly and Sandouville. The solar project will have an installed power capacity of 60MW, which could power a town with a population of 15,000 at maximum output.

Sunny site up
If building an effective solar pv installation in the UK represents a triumph of determination and technology over an uncooperative climate, GM has demonstrated the benefit of locating in sunny places to begin with, through its plant at Zaragoza in Spain, which was completed in 2008. The attractiveness of pv was doubtless enhanced by a generous government feed-in tariff but experience with the 12MW array on the roof has led the company to deploy solar elsewhere in its European network, and the Kaiserslauten plant now sports a 2.5MW roof-mounted array. 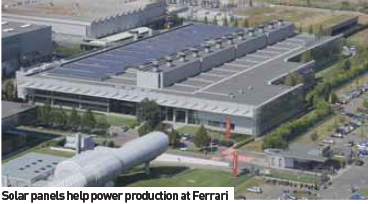 It has gone further and built on its heritage, with a series of roof-mounted arrays on its plant at Russelheim, Germany, which was the original facility opened by Adam Opel. There were a few challenges involved as the facility represents several eras of expansion from its original construction in 1906. It has a mixture of old and new buildings, including some that date back before the Second World War; however, that turned into something of an advantage as the construction of the older buildings is very robust and was easily capable of supporting the extra weight of the roofmounted systems.

The original contract, to build a 1.45MW pv plant on the top of building K170, was with Solon SE. Building of the crystalline silicon pv module array began in February 2010 and was completed in September, seven months later. The following year (May 2011), GM contracted with Wattner AG to build three more roof-mounted arrays, on buildings K40, M55 and K65. They were to be of REFUsol c-Si and Solar Frontier copper indium gallium diselenide (CIS) thinfilm pv modules mounted on aluminium skeletons. One of the reasons for the choice of CIS thin-film was that GM is interested in experimenting with thin-film technology, which can be both cheaper and more flexible than previous systems – although it is also less efficient, so requires more area for the same output. The total area of the four arrays is 225,000 sq m, equivalent to 32 football pitches.

The total value of the project is €20 million. As GM wanted the project to be cost-neutral, the contractors raced to ensure it qualified for the more favourable feed-in tariff regime in Germany, which came to an end at the beginning of July this year (2012). They succeeded and the solar arrays provide power for the factory’s assembly lines, with excess production during downtime at the plant being fed back to the national grid. Power output is reported to be ‘meeting expectations’, according to an interview with Rob Threlkeld, GM’s global manager, for renewable energy.

The race to lead globally
GM continues to have global ambitions for renewable and sustainable energy and is in the process of installing 1.8MW of pv at its Toledo, Ohio transmission plant; a 350kW array at the Orion Assembly Plant in Michigan; and other resources elsewhere. It aims to have a total of 125MW of wind and solar power resources across the world by 2020, including both new and existing sites in the USA and China. It is investing US$513 million in two plants in Joinville, south of Rio de Janeiro, Brazil. The project will involve several environmental initiatives in the pursuit of LEED certification; the solar pv element will provide power for the plant’s lighting on the manufacturing floors and administrative offices. Savings in CO2 are estimated at 10 tonnes. Solar thermal power will heat 15,000 litres of water per year, which is estimated to be equivalent to the consumption of 750 people. It will reduce the usage of natural gas and save around 17.6 tonnes of CO2 emissions a year. The engine plant is expected to start operating by the end of 2012. The company is building another transmission plant with environmental features in the complex, which is scheduled to start production in 2014.

Threlkeld has indicated that GM believes it is the only auto manufacturer with those ambitions. It had better hurry up to reach them, because others have some big ideas as well. As well as Renault’s massive commitment in France, Dongfeng Honda Automobile Co Ltd (DHEC) in China has installed a Honda Soltec system capable of generating over 100kWh of electricity per year, which is used in the administration area building and part of the production area. In August 2012, the official Xinhua news agency reported that DHEC’s second plant at Wuhan in Hubei province had become the world’s first vehicle plant to build cars using solar energy. The solar panels used are copperiridium- gallium-selenide thin-film, which are claimed to require only half as much energy in production as siliconbased cells. Solar pv installations at Honda facilities in Japan have a total output of 3.3MW. The company says that it will install a 2.6MW Honda Soltec system at its new Yorii Plant, which will then be the largest solar power generation system at an automobile production facility in Japan.

In the USA, BMW has started in a small way, with a $500,000 solar power system to provide all the electricity to run its Zentrum Museum at its South Carolina facility, as well as the energy for three new electric vehicle charging stations. Further west, Ford has partnered with Detroit Edison, Xtreme Power and the state of Michigan to establish a solar pv generation system at the Michigan Assembly Plant. The 500kW solar system is integrated with a 750kW energy storage facility that can store 2MWh of energy in batteries. Toyota Motor Manufacturing, Mississippi (TMMMS), the company’s newest US plant, has deployed an integrated energy programme that uses biomass, solar and wind power to reduce emissions, while pursuing projects to reduce water consumption and use more recyclable products. TMMMS is targeted to become the seventh Toyota plant in the USA to achieve zero-landfill status.